There is something salaciously delicious about communicating, through a story, the relinquishing of power required by the target of any spanking session, not to mention the flush of power and responsibility of trust taken on my the spanker.

Published by 1001 NightsPress (the home of my incredibly kinky courier novella, Not Her Type), my anthology, Take Control: Stories of Male Domination/Female Submission includes one of my favourite spanking stories, Dinner With Tess.

Here’s a tasty extract for you…
…Jon’s laughing voice echoed through the hallway and into the kitchen, as Tess went to greet his friends.

‘Here she is,’ Jon’s arm swept around his girlfriend, ‘Tess, meet Jack and Ed, my friends from the club.’

‘Hello,’ she spoke clearly, trying to cover her shyness. As she shook their hands, Tess couldn’t help feeling uncomfortable by the way they looked at her. It was as if they were assessing her in some way, and she suddenly felt very aware of the shortness of her denim skirt and the thinness of her white cotton blouse.

‘She’ll do well’ Ed’s eyes x-rayed Tess as he spoke.

A private shiver shot up Tess’s spine. Do well for what?

Jon ushered the new arrivals into the living room, whilst Tess gratefully fled to the safety of the vast kitchen. She was so preoccupied by the image of Ed’s hungry expression, that when Jon quietly came in and touched her shoulder, she jumped in surprise.

‘Meeting good?’ Tess asked as she checked the progress of the vegetables.

‘Excellent, we’ve organised a photography competition.’ Jon ran a hand under his lovers’ skirt, and stroked a finger between her naked legs. ‘Good girl, you remembered the no underwear rule.’

Tess looked towards the door in alarm. ‘Jon, don’t. Someone might come in.’

‘Jon!’ Tess’s face coloured, but her flesh responded instantly, as his expert finger rubbed against her clit.

‘Bend over.’ Jon patted one of the kitchen stools.

‘Do as you’re told.’ Jon’s face darkened, and his voice took on the dangerously soft tone Tess had quickly leant not to disobey, ‘I don’t want to raise my voice and attract attention do I.’

Tess shook slightly as she bent over the stools padded seat, aware that despite her fear of discovery, her treacherous body was getting turned on by the situation.

Jon flipped up her skirt, and began to smooth Tess’s tight arse with his palms. Grabbing a wooden spoon from the worktop, he tapped it against her backside, soft at first, then harder.

‘Jon, stop it,’ Tess, hissed at him, as she squirmed against the stool, her attempts to rise prevented by Jon’s other hand pressing firmly into the small of her back. ‘Jon, please!’

‘Come off it Tess, you know you like it really.’

‘But Jon, our guests, what will they think?’

‘They’ll think,’ Ed spoke from the doorway, a knowing smile across his weathered face, ‘that Jon is a very lucky man.’

Tess froze, her heart thudding against the stool. She knew in an instant that Jon had planned this, probably in collusion with his friends. Her face flushed and goose-pimples of uncertainty shot across her flesh.

Ed came closer. Jon passed him the spoon, ‘Perhaps you’d get her warmed up for me whilst I see if Jack is ready to proceed.’ 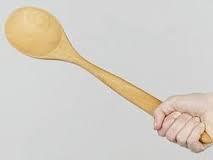 What the hell did ‘proceed’ mean? Tess gulped back a cry as Ed hit the rounded spoon against her rump, his large sweaty hand, replacing Jon’s cool skin. She didn’t have time to think, all her efforts went into not letting tears stream down her face, as Ed continued his work with enthusiasm.

‘Yes thanks, Jack.’ Ed paused in his work, and slid a hand across Tess’s reddened arse. She flinched at his touch.

‘Enough I think.’ Jon pulled Tess up right. She hung onto him as the blood drained from her head back to her body. She wanted to say, ‘How could you? What are you doing?’ But a look at Jon’s face, at all their faces, prevented her.

‘Serve up the dinner; just three plates.’ Obeying his order, Tess, her rear still smarting from the recent assault, slopped the dinner onto the plates, without even registering that she was only serving food for three, rather than four.

‘Good girl. Come here. Now, as quickly as you can, we would like you to take off your clothes…’

If you’d like to find out what happens to Tess next, you can buy Take Control from-