I’m delighted to welcome the wonderful Tamsin Flowers back with my site today, to tempt us with a little of her latest work, The Crimson Bond.

Over to you Tamsin…

Happy Christmas and a big thank you to Kay for having me over today to talk about my new release, The Crimson Bond. It’s the story of a vampire love triangle and it was so much fun to write that I’m now deeply immersed in writing the sequel to it—and it will eventually grow into a trilogy. See, there’s that number again – three!

One thing that was interesting to think about when I was considering the changing relationship between my three central characters was the fact that vampires are immortal and could, in theory—if no one sticks a stake through their heart—live forever. So how does that play out for a couple. Vampires are volatile, passionate and driven by lust but even the deep emotional bonds they form must be stretched and strained over the centuries. In my story, the original vampire couple, Etienne and Elouise, have been together for a century when a naïve young student, Willow Jackson, catches their attention. The lust Willow stirs up in both of them sets the wheels in motion for an epic story of blood lust and vampire passion, jealousy, revenge and ultimately, a love that can never be buried…

In the excerpt, Willow believes she has been bitten by a vampire and goes to confront the man whom she hold responsible. However, it is his wife, Elouise, she runs into – a first encounter that will change the course of her life forever…

Enjoy it and have a wonderful holiday break! 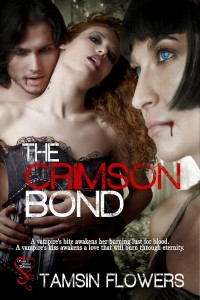 Willow Jackson develops an unhealthy obsession Etienne Corbeau; little does she realise he’s a suave, sophisticated vampire.  After appearing in her dreams, Willow is astounded to find Etienne in her room for real and even more shocked when, in the throes of a passion she can’t resist, he sinks his teeth into her neck and drinks her blood.

But Etienne is greedy and to save Willow’s life, his wife Elouise forces her to drink vampire blood.  From this moment Willow is herself a vampire, forming an unbreakable bond with Elouise which forces her to choose between the beautiful new vampire and her husband of two centuries.

As Willow learns to tame her bloodlust and vampire sex carries her to new heights of physical pleasure, Elouise is snatched away from her.  The battle lines are drawn: now she and Etienne will fight for possession of the woman they both love…

“What’s your name?” said Willow, still leaning back against the wall. Her voice was shaky and she glanced at where she’d left the whisky on the table.

The woman followed her gaze and picked up the glass.

“Changed you?” Willow couldn’t believe the woman in front of her was claiming to have been married for nearly a hundred years.

She pointed up to her open mouth with a finger and for the first time Willow noticed two sharper looking teeth on either side of her upper jaw. Hardly fangs, but definitely pointed.

She stepped toward Willow with the glass and held it to her lips. Willow gulped the strong alcohol gratefully.

“For you to have become a vampire, you would have had to drink some of his blood in return.” Her eyes narrowed for a second. “Which I assume you didn’t?”

“No,” said Willow, shaking her head.

Elouise put the glass down on the table behind her. She was standing very close to Willow now and she placed one of her hands on Willow’s shoulder. She stared intensely at Willow’s face with sharp, emerald eyes. Willow took a nervous breath. The air around her smelled deliciously of sandalwood and myrrh.

“Etienne was telling the truth. You are very beautiful.” Her voice had lowered by a half tone and she spoke slowly, each word caressing Willow’s ears.

In a sudden blur of movement she had both Willow’s hands pinned back against the wall above her head. Her wrists were crossed and held in a vice-like grip by one of Elouise’s hands. With her other hand, she gently peeled away the dressing on Willow’s neck. She moved in closer until Willow felt the vampire’s breath on her throat.

Willow turned her head away from the vampire. But the rest of her body was powerless to move, paralyzed by something stronger than fright. Elouise Day had a power that drained her will to resist. She felt the stroke of a tongue close to her collarbone, gliding over the two wounds.

Not again, she thought to herself and a whimper escaped her lips. But even as she shied away from the female vampire, she needed to experience the searing combination of pain and pleasure again.

“Shhhhhh, pretty girl,” whispered Elouise, lifting her head to look up at her. She touched Willow’s mouth with a soft finger, a caress that made Willow’s legs weaker still.

“Etienne,” she called in a deep, guttural voice. “Come and watch me feed on your little blood-baby.”

Willow saw a streak of grey cross the room and then Etienne Corbeau appeared at his wife’s side. He put a hand up to her bobbed hair at the nape of her neck and pulled her head back, kissing her ferociously inches from Willow’s face. Willow felt the pleasure sensors deep within her waken and stir.

Then he pushed Elouise roughly away and turned the full beam of his dark eyes on Willow. Elouise licked her lips with a satisfied smile.

But as she said it, her mind was bombarded with memories of what had happened last time she’d seen Etienne. His hands on her breasts and his mouth at her throat. The searing pain had become as addictive as pleasure. She whimpered as her back arched involuntarily, thrusting her hips away from the wall toward the vampire.

As fear was overcome by longing, Willow felt both of the vampires’ hands on her body.

You’ll find The Crimson Bond at Secret Cravings, Amazon US, Amazon UK, All Romance and Smashwords. 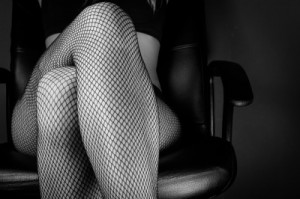 Tamsin Flowers loves to write light-hearted erotica, often with a twist in the tail/tale and a sense of fun.  In the words of one reviewer, ‘Ms Flowers has a way of describing sexual tension that forces itself upon your own body.’ Her stories have appeared in a wide variety of anthologies , for publishers including Cleis Press, Xcite Books and Go Deeper Press. She has now graduated to novellas with the intention of penning her magnum opus in the very near future.  In the meantime, like most erotica writers, she finds herself working on at least ten stories at once: while she figures out whose leg belongs in which story, you can find out more about her at Tamsin’s Superotica or Tamsin Flowers.

Many thanks again Tamsin for taking time out at this busy time of year to come and share your delicious story with us.

Have a wonderful Christmas.