Guest Blog from A.M. Hartnett – Here For A Good Time

I’m delighted to welcome another new voice to my blog today. The lovely A.M.Hartnett has come by to share a little from her latest Xcite publication!

In Here For A Good Time, Alexis looks at her company retreat not only as a way to get the creative juices flowing but as an opportunity to hook up. She’s thinking of something uncomplicated, like a hot waiter or another guest. Definitely not Chris Kendrick, who she doesn’t even really like and who she wouldn’t otherwise give the time of day to.

Frankly, I didn’t even plan on giving Kendrick the time of day. When I started writing this, Alexis was supposed to simply hook up with Kendrick and a few others before moving on to her boss for the HFN. Kendrick was a bit player, a cock attached to a bit of swagger that I was going to use for my nefarious purposes.

Then it happened:  I started the scene where Alexis was supposed to dismiss his attempt at a second quickie and everything fell into place. It had to be Kendrick from start to finish. He was the HFN, and bossman and all the others could just fade into the background. 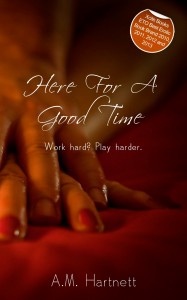 When Alexis booked her work retreat at The Deveaux, the most she had to look forward to was a bit of spa time on the company dime, but flashy salesman Chris Kendrick has an even better suggestion. For years they’ve had a hot and cold working relationship with a bit of flirting mixed in, and now is the perfect time to get that spark out of their systems.

Three days hopping in and out of beds (and other convenient places) shows Alexis that Kendrick’s smooth demeanour is more than just talk, and that aromatherapy and soft-tissue massages have nothing on Kendrick’s firm hand.

Kendrick kept a straight face long enough to raise his glass to his lips, then sputtered with laughter. ‘So I ask if you think it’s fair that the boss gets to go home and fuck his wife, but expect me to keep my hands off when I know you’re sitting there all primed and ready?’

She sipped her water again, enjoying the delicious thrill that skittered along her pussy. ‘I think your chances have improved. What do you have in mind?’

‘I slipped the bartender a hundred bucks. No one is going to the stockroom behind us for half an hour.’

She glanced down the bar to her co-workers, all of whom had broken into their separate groups and were engrossed with each other, oblivious to anything out of sorts going on between two of their number.

‘If you say no, I might have to cause a scene,’ he said close to her ear. ‘I think bending you over this stool and showing everyone how wet you are ought to make my point.’

She couldn’t look at him and she couldn’t keep her grin from appearing. ‘I’ll give you a three-minute head start.’

The second Kendrick left her side, she glanced at her watch, and began the countdown. Exactly three minutes later, she slipped from the stool and followed in his wake.

With four doors to choose from, she stood at the head of the corridor and peered down it until one opened.

‘Hurry?’ she said as she slipped in. ‘We have half an hour.’

‘And I plan to get as much as I can into that little amount of time.’

Much to Alexis’s relief, the door locked from the inside. For a moment, there was the hard press of his body pushing her in the darkness, and then the light popped above their heads and she found herself gazing up at Kendrick.

‘Take the dress off,’ he murmured, his hand behind her, tugging the zipper between her shoulder blades. ‘I don’t think you’d find it funny if you split a seam and had to walk out of here in my shirt.’

She wriggled desperately out of the form-fitting dress, cursing her tits, her hips, her ass, and every spare curve between. ‘What about you?’

‘When I’m ready,’ he said, then whistled as the dress finally gave way and pooled at her feet.

Alexis started to turn back to him, but instead found herself with her tits squashed against the door as he held her by the scruff of her neck. She didn’t protest his rough treatment. She was thrilled at the idea of being fucked like this and couldn’t keep her hands off any longer. She reached between her legs.

‘I don’t think so,’ he said with a chuckle, and though he released his grip on her neck he captured her wrists and drew her hands up over her head. ‘I couldn’t get my way in the car, but I’ll damn well get my way right now.’

Available now on Kindle and Kobo from Amazon, and all good eRetailers.

A.M. Hartnett began writing in 2006 and has published more than thirty short stories. Her work has appeared in more than a dozen anthologies, including Cleis Press’s Sudden Sex: 69 Sultry Short Stories (Ed. Alison Tyler), and The Big Book of Orgasm: 69 Sexy Stories (Ed. Rachel Kramer Bussel). She has also written three novellas and a novel as Annemarie Hartnett. For more information on her publications, please visitwww.amhartnett.com

Many thanks to A.M.Hartnett for popping over today! I hope that’s tempted your appetite!

Happy Birthday Not Her Type!!!