Over to you Jennifer…

When I told a friend I had written a werewolf story her comment was, “How do you research werewolves?” They are, after all, a mythical/unreal creature. This is a very good question! 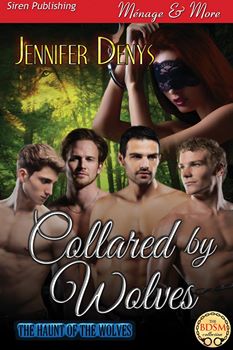 This excerpt is from ‘Collared by Wolves’ and is in the viewpoint of Griff, a very alpha Dom:

It was illegal for sex acts to be performed in public, but this club, commonly known as “The Haunt,” managed to stay secret from the human authorities, partly because of the mysterious Shroud. No one knew where it came from other than it had been spoken about for generations. But also, due to the remote location in a forest a long way from human habitation, not even near any werewolf homes, it had been possible to stay secret. He chuckled to himself. “Deer Park” was a misnomer as there weren’t any deer there, not where wolves lived.

Shaking his head he chuckled at image of human Doms peeing in their pants at sight of a werewolf sub turning wolf as he whipped her.

It is also interesting to research the myths/stories around werewolves and what qualities we associate with werewolves which include greater strength than human or wolf, transformation to take place at full moon, vulnerable to silver bullets, a human can become a werewolf if bitten by one. Now many of these are modern developments invented for works of fiction!!

Historical methods of identifying a werewolf are intriguing: eyebrows meeting over the bridge of the nose, low set ears, swinging gait, curved fingernails, bristles under the tongue (that last is a Russian superstition), and a person who devours recently buried corpses (a trait going back to medieval Europe!)

So how does one become a werewolf other than being bitten by one? Apparently by wearing a belt made of wolfskin, drinking rainwater out of the footprint of a werewolf, being born with epilepsy(!), making a pact with the devil, and – I love this one – in Italy, France or Germany a man or woman could turn into a werewolf by sleeping outside on a Summer night (but only on certain Wednesdays or Fridays) with the light of the full moon shining directly on their face!!!!

Now suppose you have been unlucky enough to become a werewolf, methods to remove the curse include: wolfsbane, exorcism, being struck on the forehead with a knife, piercing your hands with a nail, being addressed it three times by your Christian name.

The conclusion to researching werewolf myths is that you can pretty much make up anything you like, so I don’t feel too bad making my werewolves into BDSM-loving ones!

What I do like doing with my werewolf stories is to include lots of wolf behaviours, eg growling, licking, sniffing, howling, and so on – or how the humans react when the werewolves change into the human forms. This is an unedited excerpt from the new story ‘Torn Between Two Lovers’:

A gurgle of terror went through Jace as Stefan changed forms and he couldn’t speak, or even think, coherently for a few moments until Evie—or rather the wolf that was Evie—came up to him. Hysterically he wondered if they had wolf names of if he had to call them by their human names. In the meantime wolf Evie was licking his hand. “Nice girl, good girl. Just don’t eat me.”

Jace swore that Stefan chortled at him. Glancing over, the bigger wolf certainly had a smile on his face. But that could always be a gleam of delight at the thought of ready human food.

Evie butted her head under his hand, rubbing her muzzle along his palm.

“Okay, so you want me to stroke you?” He did as she seemed to desire. The fur on her back was coarser than he expected. As he got bolder and pushed his fingers into her dense coat, he could feel much softer, but thicker fur. “Hey, this feels almost wool-like.”

In response, Evie pushed her body against his legs, wrapping a long tail around his knees, before slapping the tip against his butt persistently, almost as if she was trying to get him to move.

“So, I take it that means sit down and cuddle up, eh?”

However, Jace was surprised when she threw herself onto the ground, rolling on her side. His jaw dropped. As he watched Evie looked over her shoulder, jerking her nose behind her, clearly wanting him to lie down at her back.

He glanced over at Stefan who was just sitting there. When he hesitated, though, the big wolf growled at him making Jace jump. It wasn’t a loud growl, but it was still scary and he quickly did as they requested.

I also considered how werewolf women may differ from human ones. This includes their bodies being taller and leaner than their human counterparts. Whilst ‘Collared by Wolves’ has a female heroine, the new one due out ‘Torn Between Two Lovers’ has a werewolf heroine – so it was fun to work on the differences between the two women, the human being more rounded, with bigger breasts.

Would I like to be a werewolf female myself? Oh yes! Particularly a werewolf submissive *big grin*.

Look out for ‘Torn Between Two Lovers’ in the summer (which features two minor characters, Evie and Stefan, from the first book as the main characters along with a new character, Jace), but if you want to read ‘Collared by Wolves’ in the meantime it is available on Amazon. 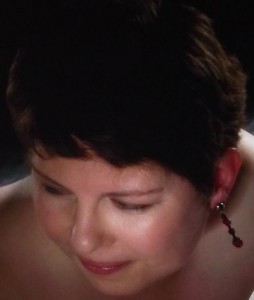 Brit Babe Nominations at the ETO!!