I am delighted to introduce a relatively new voice (or pen) to the world of erotica today. Alice Raine is one of the most popular Cariad authors in the Xcite stable- not to mention an all round lovely lass. Over to you Alice… 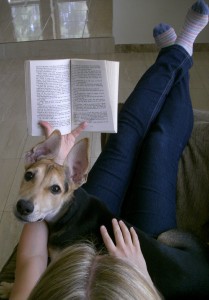 Well here goes, my first ever blog post! A huge thanks to Kay for the invite be here today.

I’m new to the whole author scene, so rather than unattractively flinging links to my books in your face I thought that instead I’d use this post to share a little about my writing journey; how I got here, what I write, and why I write. At the end of the article, once I’ve won you over with my dazzling wit, charm and wonderful personality, then I’ll fling the book links in your direction… 😉

It’s probably similar for most authors, but there suddenly came a day where I just started to feel a need to write, like a compulsion really, I just couldn’t bear to keep the ideas in my head any longer so I sat at my desk and just started to splurge the contents of my brain onto paper in random notes and jottings which, over time, became story plots, character ideas or bizarre fantastical settings. Ideas would literally pop up from nowhere; a quirky character on a station platform, an article in the local newspaper, snippets of a conversation overheard in the pub, even my dreams started to have a plot structure to them!

For years my writing was just a hobby, I never shared my work with anyone, but I was content to know that my stories were at least out of my head and nestled safely in my laptop. Only recently have I managed to do anything more with my work, so for me the entire ‘being published’ thing is still shiny, new and hugely exciting. People are reading my books… my ideas… and what’s more, they seem to be enjoying them… it’s just such a bizarre thought that it gives me goose bumps just thinking about it!

Like most writers my first venture in submitting a manuscript – a vampire series – was rejected by everyone that I sent it to. The dreaded ‘thanks, but no thanks’ slips arriving in the post thick and fast. As disappointing as this initial phase was, I did however receive some amazing feedback from Darley Anderson, a hugely famous and well respected literary agent in London. Despite how busy he must have been, he’d actually taken the time to respond to my submittal with two pages of constructive feedback, all personally hand written in flowing fountain pen and signed by the man himself. The basic premise of his comments was that he saw promise in my writing style and had generously given me several tips to help improve it.

So how does a girl go from writing vampire books to producing a four book series of contemporary adult romance with a fair bit of saucy action, you may ask? This is actually where the story gets really interesting. I’d adapted my writing using the tips Darley had given me all those years before and in the interim had written several chick lit romance novels – all very gentle and about as non-erotic as you can get. It was when sending these off in a further attempt to get published that a literary agent responded to me via email, her comment was, “I like your writing style, but it’s not very cutting edge content, we need something grittier, something a little darker… have you by any chance read a book called Fifty Shades of Grey?” At her words I rolled my eyes (in a very Anastasia Steele like gesture) and immediately saw where she was going with the conversation.

Five months later after some fairly eye-watering internet research and very long nights typing, ‘The Darkness Within Him’ was complete; part one of a tale following the lives of a famous pianist Nicholas Jackson and his businessman brother Nathaniel, both men with a troubled past and equally kinky sex lives to go along with it. The original literary agent who’d suggested I write it had rather inconveniently retired by this point, but undeterred I set off in search of other publishers or agents, and a few months later through the delightful medium of Twitter I found my lovely publisher, Accent Press.

Since I’ve started down this writing route I’ve found two common responses when I tell people about the books I’ve been lucky enough to get published; they’re either completely not bothered by the genre and just interested in what it’s like to write an entire book, or they cock their head to the side and raise an eyebrow in that curious way that tells me they are trying to work out exactly what I get up to in my bedroom. I can’t help but think that they’d be rather disappointed if I confessed that what I do most in my bed is sleep…

And that as they say, is my writing journey in a nutshell! So far it’s been hugely exciting working with Accent Press, books 1 and 2 of my Untwisted series are currently out, with number 3 being released on the 4th of December this year. They seem to be doing really well in the Amazon chart, the response from readers has been great, and there is even a paperback release planned for Valentine’s Day next year. I’m really hopeful that this could be a huge turning point in my life, perhaps that long sought after dream of doing what I love for a living might actually become a possibility!

Now, before I sign off, it’s time for the sales pitch! Nah, I’m only kidding, instead of trying a fancy spiel to make you buy, I’ll simply attach the links for the first two books in my Untwisted series so you can have a look if it takes your fancy.

Thanks for reading, and once again, thanks to Kay for hosting!

Book 1, The Darkness Within Him: http://www.amazon.co.uk/The-Darkness-Within-Him-Untwisted-ebook/dp/B00LO3RLMC

Book 2, Out of the Darkness: http://www.amazon.co.uk/Out-Darkness-The-Untwisted-Book-ebook/dp/B00M0KBUES/ref=pd_sim_kinc_1?ie=UTF8&refRID=0P0FEV9XS6NHFPMPK6QR

Many thanks for coming by today Alice! I’m proud to have been your first blog host!!

Ten Years As Kay- Part 3- The Podcasts and Pictures