Guest Blog from C.J. Payne- A View To Thrill

I love having guests over to play- and today I’m delighted to invite a first timer to my site. So, it’s a big welcome to fellow Xcite author, C.J. Payne…

Where do I start? Well, firstly thanks to Kay for giving me this opportunity to write this blog! I’m a bit of a newbie to all this and live in a technology vacuum – in fact, this is the first blog I have written (cue applause) also, I’ve only just got onto Twitter! But I’ve got a new book coming out in soon entitled Sting (published by Xcite) so I thought I would put ‘pen to paper’ so to speak and tell you good folks about it. It’s a Fem Dom story and concerns Lynton Field, a feckless 30 something, who lives with the beautiful, but avaricious, Chloe. Lynton has been at the wrong end of the career ladder all his life and is facing disciplinary action in his current role. He decides to seek out an old boss and ask her for a reference. Well, I’ll let Lynton take up the story… 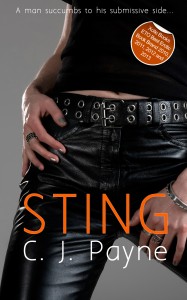 Julianne sat on the sofa opposite me with her legs folded underneath her. Her black pencil skirt stretched around her knees. She sipped her tea. I leant forward and looked down at the grey-blue carpet and rubbed a hand through my short, gelled hair. I gulped. I was aware that I had blushed … I was also aware that my cock, on hearing her words, had started to rise like dough in an oven. I tried a false laugh.

Julianne’s dark eyes drilled into me. Her lashes were thick with mascara, her eyebrows were plucked and her eyeshadow neatly applied – only her lipstick had worn off. She shifted on the sofa and pulled at her ankles so her knees were further under her and the fabric of her skirt stretched even more tightly. She was attractive and glamorous and sexy – and she knew it. God, how many times had I wanked over her when she had been my manager and I had been a 20-something novice with a cheeky grin and a playful attitude towards work? Now my past sins were coming back to haunt me.

‘You’re never too old to learn a lesson, Lynton,’ Julianne said, her eyes burrowing into me again. ‘And I think you deserve a spanking.’

That word again! It sent shivers down my spine. Get fucking down, cock, I told myself. Get fucking down! It was like talking to an errant dog – the thing was butting in where it had no place to. I didn’t want to be spanked – not at 32, not by my ex-manager, in her house on a wet, autumnal Friday evening when I should have been out with my girlfriend, Chloe. OK, I often indulged in sex games with Chloe, and some of those included binding her wrists with ribbon and giving her a mild spanking. I was always in charge – I was the dominant partner – but this was different. This wasn’t a sex game. This was serious. This was vengeance.

Julianne continued, ‘You made my life a misery, Lynton, do you know that? You and DW and Suzy and Andrew and Debbie. A misery.’

‘I’m sorry, I didn’t know that.’ I was genuinely shocked. ‘I suppose when you are young you don’t realise what impact your actions have on others.’

‘No, I don’t suppose you do. But supervising that section was my first step into management and I had ambitions. I wanted to get on – I wanted to be more than a mother and a wife. Perhaps I was too soft.’ She looked away and spoke to the glass-fronted cabinet in the corner. ‘I know I was too soft.’

There was no doubt about it – we had messed around. We were all a similar age and so had come to the office for a social life rather than to work. I know there was a lot of sickness and time off due to drink-related illnesses and when we were in … well, if Julianne had managed to get a day’s work out of any of us she had been lucky.

‘Peter didn’t want me to have a career so I had all that at home as well,’ Julianne continued. ‘It was the beginning of the end for my marriage. Oh, I’m not blaming you – Peter and I were weren’t right for each other – but it didn’t help.’

Fuck me, she was making me feel bad!

‘I suppose we were a bit young and stupid,’ I said.

Julianne fixed me with her dark eyes again. ‘You were the worst.’

‘So why have you come to me for a reference and then told me you’re likely to have disciplinary action taken against you if you don’t find another job?’

I laughed. A hollow echo of a laugh. A picture of the Laughing Cavalier was on the wall opposite me and, as I met the old soldier’s beady eye, I had the distinction impression he was laughing at me and saying, ‘She’s got you there, son.’ I hadn’t really changed. OK, I didn’t drink as much nor mess around in the office to quite the same extent I had when I had been 20, but there was no getting away from it – I was pretty damned lazy and I liked chatting up the office talent. Not that I was a womaniser. Not really. Not like DW, who seemed to be a natural in that department and regularly ended up with single or not-so-single women between his sheets. Despite my increasing “maturity” I had still managed to end up on the wrong side of my present employers and knew if I didn’t find another position I would be sacked.

‘So why did you agree to see me?’ I asked, in response to her question. ‘After I sent you the email, I mean? It would have been easy enough for you to have emailed back to say a reference was out of the question.’

I was beginning to wish she’d given me the brush-off. All I had wanted was some help with my CV and a reference – I didn’t want to be put on a roller coaster guilt trip.

Julianne finally placed her cup down.

‘Curiosity,’ she said after a while. ‘I wanted to see if you were still the same immature 20-year old who caused me so much stress when I placed my foot on the first rung of the managerial ladder or whether you had grown up. Also, I have to say I could not quite believe you would have the cheek to ask me of all people for a reference.’

I blushed again. At least my cock had gone down. I’d made contact with Julianne through internet research and we had had an email exchange – though she had moved on from ZBC Communications, the company we had both worked for, she was still at the same address and it was easy enough to track her down. Julianne had agreed to provide a reference and had even volunteered to look at my CV and update it for me – but now it seemed as if it had all been a ploy. We’d met up in a pub and then she had invited me back to her place: I had thought I was finally going to get to her into bed because, Lord knows, she was hot, but I had come to realise that there was about as much chance of that happening as DW being elected Pope.

Uncrossing her legs, she placed her stockinged feet on the floor. I looked around the tidy, well-furnished living room. Julianne still had a wedding photo on a cabinet and photos of her two grown-up children, as well as nick-knacks from holidays abroad – a bottle of ouzo and pieces of china from various European excursions. I knew she liked the sun and had often returned from holidays abroad with an all-over tan – or so I had liked to speculate.

‘So, you’re not going to help me then?’ I said, defeated.

She smiled. ‘I didn’t say that, did I? I’m happy to help you update your CV and act as a reference for you – which will, let’s be honest, be economical with the truth – but you behaved really badly towards me when you were younger and I think you should acknowledge that.’

She suddenly stood up and brushed down her black pencil skirt. She was quite tall and, I would guess, a size 16 or 18. Her figure was curvaceous and she had large breasts. I could see the outline of her lacy bra through the thin, light brown jumper she wore.

‘Yes, but you don’t really mean you want to spank me though, do you?’ I said with a confidence I didn’t feel.

Julianne was standing over me. I looked up. I suddenly felt weak. I could hear a voice in my head saying “sorry, sorry, sorry”. My cock started to rise again. I placed my hands over my groin to cover it up.

From there on in he is immersed in the world of Fem Dom with Julianne teaching Chloe the ropes – so to speak – so that poor old Lynton does as he’s told where by the women in his life … and eventually he finds true love in the dominating arms of the woman he truly loves.

The book will be published soon in e-format by Xcite and will be available as a print on demand book sometime thereafter.

My first book, published by Xcite, was the unusual Kiss – unusual as the main character was an itinerant cross-dresser, Alex, who had been defended in a school lifting case by an ambitious, sassy and sexy solicitor – Kara Richardson. After the trial Kara starts to take Alex in hand, mixing transvestitism with domination… 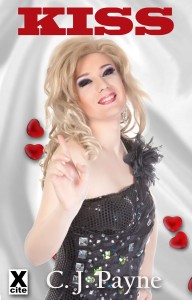 I work full time in a ’sensitive’ area so can’t say too much about  my background suffice to say I have written for a number of years – approaching 30 in fact! I have previously had stories in the now defunct Forum magazine, numerous articles in the equally extinct BDSM magazine, Privilege Plus and I have also written more conventional stuff. In my spare time my wife and I love the theatre – we live close to London and go about once every couple of months – we particularly like musicals. I also enjoy (watching) most sports, particularly horse racing. I am a keen gambler and one day I will make a fortune out of writing… a betting slip…

Many thanks for visiting today C.J Payne! I am honoured to be your very first blog host!