Vanilla to Kink, the Sultry and the Sordid 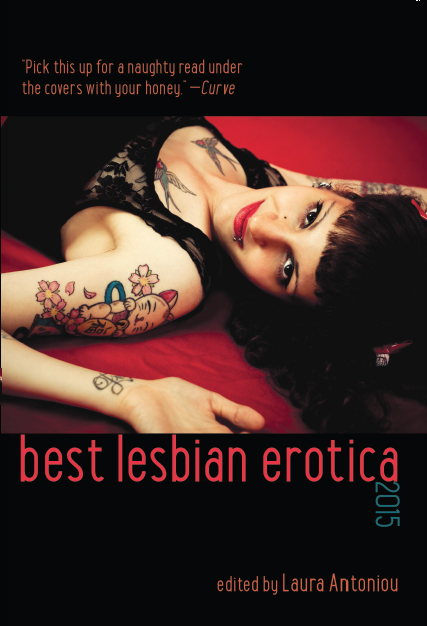 New series editor Laura Antoniou has selected the best of the best short stories of lesbian erotica in Best Lesbian Erotica 2015. Featuring erotic encounters of all kinds, from the allure of first glance to the reawakened passions of established relationships, each piece is overflowing with lust and pleasure. Best Lesbian Erotica 2015 brings sex in the cyber-age, lusty backstage rendezvous, mythological encounters, and a taste of leather—all between two covers. Dubbed “an elegant stylist of erotica” by writer Pat Califia, Antoniou has gathered stories of varied style and theme, and brought them into one cohesive—and sexy—anthology that will spark your fantasies.

“One of the wonders of Best Lesbian Erotica is the range of women depicted in these stories. What unites this disparate group of folks is desire and hot sex. Since this is a Best Of anthology, there’s really no such thing as a bad story here.”

Here’s a HOT extract for you!!

By the end of the next song, we were kissing. At first, she was so gentle that it teased me, and I moaned a little as I pushed my mouth against hers. She chuckled but didn’t stop, pressing her hand against my lower back as our kisses grew desperate. I sucked on her lower lip, aching below the waist. She brushed my hair away from my face, then, much to my body’s chagrin, turned slightly away.

I had been dimly aware that my new crush was part of a group. They’d been hanging in a haphazard cluster in the middle of the floor, wing-womaning each other as they checked out the scene and danced up the guests around them. It wasn’t until we came up for air, though, that I realized the friend nearest to us was the Nylon Angel. As if on cue, she leaned over to my Andro Eagle and said something I couldn’t hear, then leaned farther. Their lips met, and both pairs of eyes went to me.

Nylon and I each put an arm around each other as she moved into our space. Eagle watched, rapt, as I kissed her girlfriend’s made-up cheek. I can tease too. Slowly, slowly, I moved in for my second first kiss of the night. Nylon had softer, fuller lips, but she didn’t waste time being coy. Her tongue played with mine as our mouths got warmer and wetter, melting together like two parts of a whole.

But for once, I wasn’t one of two parts—I was one of three.

I grabbed the cloth of Eagle’s tank, over her belly, and pulled her in closer.

Her mouth joined with ours. As you might imagine, it was a bit awkward, because I had never kissed two people at once before, but that didn’t keep it from being hot. I gave them several brief pecks to start, then focused on each of them in turn until I lost track of who was who. It didn’t seem to matter. I had these two sexy creatures licking my lips and caressing my shoulders, and I wished I had a wall to lean on. I was still nearly sober, but the couple made me so dizzy that standing felt like work.

“Shall we get out of here?” Nylon murmured, reading my mind. Eagle grinned in approval; all I could do was nod.

When Carmen and I had talked about my interest in threesomes, she had seemed puzzled by my desire to be the third party. “Don’t you want to wait until you have a girlfriend who’s into it? Then you could go prowling together. With a couple, you’d be the odd girl out.”

I saw her point, but the idea of playing with a couple had always been the sexiest to me. Maybe it was because I didn’t want a girlfriend just then, or maybe it was the reassurance that if it didn’t go well, I never had to see them again, but my fantasy felt like something deeper, something I couldn’t name. As excited as I was, I couldn’t help but shoot Carmen a smug look when we passed her and Myka huddled at the bar. Nylon and Eagle were on either side of me, holding my hands as we walked briskly to the door. No odd girl out here.

We talked for the whole drive to the hotel, and not small talk either. We talked about sex. We had all been tested recently (woo-hoo, responsible adults!) but would still be using condoms with toys—and as it turned out, we all liked our toys. Nylon shared that she didn’t like being touched on her stomach, and I mentioned my passion for having my thighs played with. As soon as I said it, Eagle reached over and put a hand on my leg over my jeans, without ever taking her eyes off the road. That turnoff couldn’t come soon enough…