Today one of my very favourite erotica authors, Janine Ashbless, is here to talk about her latest novel Cover Him with Darkness. I just LOVE this blog- I can picture the historical frustrations so clearly! Over to you Janine… 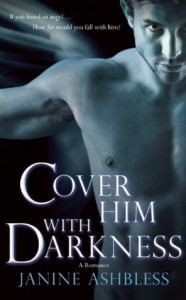 Getting angels to stand in neat lines is like herding cats. They just will not co-operate.

Imagine you’re writing a novel with the central theme of fallen angels, like I did with Cover Him with Darkness. And imagine you are, like me, a history snob who longs for compatibility with original “authentic” angel lore, in order to lend some plausibility to your fiction – instead of making up stuff like “Billy-Bob the Archangel of Table Manners.”

So you go to the Bible first, don’t you? I did. The keystone of my whole book is from Genesis Chap 6:

And it came to pass, when men began to multiply on the face of the

earth, and daughters were born unto them, that the Sons of God saw

the daughters of man, that they were fair. And they took them wives of

all which they chose.

What else does the Bible say about the hosts of heaven? Well, this is where you start running into problems which will eventually send make you bang your head repeatedly onto the keyboard and cry. It depends which version of the Bible you turn to. In the Protestant tradition which I grew up in, the only angels named in the Bible are Gabriel and Michael (and Satan). But the Catholic Church includes the books of the Apocrypha as canon too, which means they can bring in Raphael (from the Book of Tobit). That’s what you’ll find in all those Italian Renaissance paintings.

Those three are commonly counted as the archangels, the highest of all. But WAIT! The Eastern Orthodox Church (which is just as old as the Catholic one) recognizes seven (or sometimes eight) archangels. Judaic tradition suggests seven (or eight) too, but no – not the same seven (or eight). Islamic tradition suggests four, but not all directly from the Qur’an. Gabriel, Michael, Raphael and Uriel get a name-check in most of the longer lists, but after that all bets are off.

My head is starting to hurt.

In fact the Ethiopian Orthodox Christian Church – and bear in mind that Ethiopia is the oldest Christian country in the world, they converted before the Romans did – may be most relevant to my novel because it’s the only Christian tradition that regards as canon the Jewish Book of Enoch (largely because they were the only ones who knew it existed, for over a thousand years. Nowadays you can read it online). The Book of Enoch is a mad-ass visionary text that fills in the whole story around the Genesis quote at the top there. It’s full of the most beautiful stirring imagery and reads like it was written by someone who’d been snacking on the wrong sort of mushrooms. Woohoo! Bingo! So I should take my lists of angels from the Book of Enoch, right?

Wrong. The angel names and spheres of responsibility aren’t even consistent within the goddamn Enoch text. *Author throws a sulk.*

And then we get onto the medieval Angelologies as Kabbalists and occultists start weighing in, adding angels and attributing them stats like Top Trumps Cards. It’s starting to look like the rules sets for a load of competing and completely incompatible role-playing games.

At this point the divine Billy-Bob begins to seem appealing and I pour myself a very large gin and decide not to stress about getting it “right.” There is no “right.”

So next time you are watching a movie or TV series which describes Azrael as the Angel of Death and you go, “Oi! The angel of death is Uriel, you idiots! I saw it on Supernatural!” … you know why.

Cover Him With Darkness Blurb

If You Loved an Angel… How Far Would You Fall with Him?

What happens when the daughter of the village priest falls in love with an archangel banished from heaven? Milja’s heart is struck when she catches a glimpse of the preternaturally beautiful prisoner her father keeps captive beneath his church’s altar. Torn between tradition, loyalty and her growing obsession with the fallen angel, will Milja risk losing her family, and her eternal soul, for the love of this divine being? Janine Ashbless will transport you to a world where good and evil battle for true love.

Many thanks Janine- Cover Him with Darkness sounds amazing.