I’m delighted to welcome back to my site today, the brilliant HK Carlton. Check out this excellent blog- and one HOT story taster…

Thank you, Kay, for inviting me back and allowing me to share my latest release.

When inspiration comes a knockin’…

I leave the door wide open to inspiration. It usually walks right in and has a seat next to me and bothers the supreme sh*t out of me until I pay some attention. And the best way to find some peace is to begin writing it down. (usually when it shows up, I’m knee-deep in another manuscript)

The idea for my latest release came in the form of a prompt from a weekly blog hop I frequent. 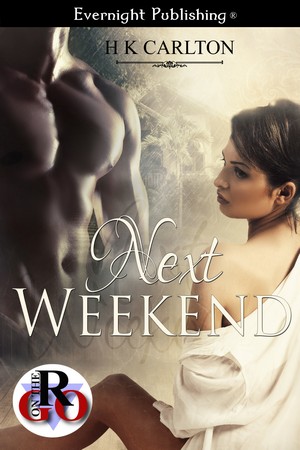 It was a sexy black and white photo of a couple, a man and a woman. From the viewer’s vantage point, the only visible body part of the male subject, is his hand and forearm. The woman is visible from just below the neck to mid thigh, dressed in only a man’s dress-shirt, which is open, showing her nakedness. The image was a .gif, so it also had the benefit of movement. The man thrusts his hand rather robustly (but not roughly) between her thighs and penetrates her with his fingers then retreats. The female subject arches to meet him. Fascinated, I watched the provocative image as it reset, over and over again. Naughty voyeur at work, perhaps, but it got my juices flowing; creatively speaking, of course. :p

I wrote the scene that the image inspired for the blog hop and posted it. It was meant to be a one-op snippet. But I soon realised the story didn’t end there. It and the characters pestered me until it developed into my latest release, Next Weekend, an extremely mild, burgeoning D/s relationship. And to make the story line a little more intriguing; our couple, Miranda and Jordan, are in the late stages of divorce proceedings. How’s that for ‘romance’, folks? 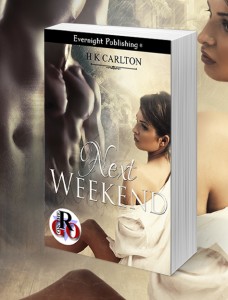 Miranda and Jordan Lang cordially invite you to their divorce…

Jordan is not completely surprised when Miranda suggests they separate. Their marriage had been deteriorating from the moment they took their vows. Although heartbroken things didn’t work out with the woman he expected to spend the rest of his life with, he doesn’t contest her decision.

The only thing holding up the final divorce decree is the sale of their get-away cabin. In a weak moment, Miranda heads there for the weekend knowing full well that Jordie will also be there. Accidentally—on purpose, she seduces him and leaves an open invitation for another naughty weekender.

But the next time they meet, Jordie’s anger over the entire situation has kicked in and he finds himself being rough and commanding with her. And even more surprising, his ex likes it.

Follow Jordie as he finds and embraces his dominant side and Miranda her submissive self. Will it be enough to save their doomed relationship or will the issues that drove them apart remain more than they can overcome?

I won’t turn down inspiration from wherever it might spring. I find some of the best things crop up, just like this one, when you’re not even looking. Thank you again, Kay, for allowing me to showcase, Next Weekend, with you and your readers. Cheers! J Here’s a little snip (with a hint of the aforementioned inspiration)

With his chin, he nudged the shirt from her shoulder, peppering hot kisses in its wake as it slid down her arm. The uncharacteristic scruff on his jaw scraped her skin, creating a whole new dynamic, as if a new man kissed her. Her knees grew weak. A wet rush dampened her panties.

Abruptly, he released his hold, leaving her frustrated. But she soon realized he only meant to divest her of his shirt completely. It floated to the floor at their feet, forgotten. From behind, he roughly gripped her breasts once more, his fingers biting into her tender flesh.

“Is this what you came for?” He opened his hands, using his palms, rounding her nipples into two hard, aching nubs. The sensation sent shooting pulses of pleasure straight to her pussy.

“You know what I like,” he accused. “And here you are parading around in nothing but my shirt and a pair of scant white panties? You knew fuckin’ well I’d be here.”

All of a sudden, he spun her around to face him. His features were angry but laced with dark desire. An expression she hadn’t seen on his handsome face in a long time. He didn’t wait for a reply or even look at her to gauge her response. He lowered his head and captured a taut nipple in his magic mouth.

Miranda moaned and grasped his dark head, holding him to her.

To her surprise he went down on one knee, then the other, suckling her expertly.

“Admit it,” he demanded, releasing her swollen nipple. “This is what you came here for.” He yanked her damp panties down to her knees. His dark eyes glittered in the firelight as his gaze roved over her bare skin. Her pussy tingled and her clit throbbed in anticipation. She wanted nothing more than to press her cunt against his mouth and demand his tongue. But she no longer had the right to ask anything of him.

Her body thrummed with need. She could barely stand still.

She did know what he liked, though. He liked it when she touched herself. There was never a time when he could just leave her to it; he always had to get in on the action.

With purpose, Miranda smoothed her hands slowly over her lower abdomen, making sure her fingers skimmed over her bare mound.

Jordie clamped his large hands on her hips. “You’re keeping things neat and tidy down here. Getting lots of ‘newly single’ action, are we?” His breath feathered across her tummy.

“No.” She trembled under her own touch and his scrutiny. “I haven’t been with anyone…since you,” she admitted truthfully. The thought of being with another man didn’t appeal to her. Not yet.

For a split second, he stilled, as if the announcement had surprised him. “Then admit it,” he gritted through clenched teeth, his jaw tight. “You came here for this.” He forced his hand between her thighs, plunging one thick finger roughly into her.

She cried out at the sudden but welcome invasion. She clenched her inner muscles in an attempt to entice him to repeat the delicious action. But he pulled away, as she knew he would, torturing her. She gripped her own mound, adding some much needed pressure.

“Say it!” He stared at her hands as she moulded her flesh. She tilted her quivering pussy toward his hot mouth. Inviting, tempting him to deny her.

“I guess…I’d hoped…” she hedged, weakly.

“Yes. I came here for this,” she blurted, panting, almost dancing from foot to foot.

To her relief, he replaced his hand between her legs. Running his fingers along her saturated crease, he thrust inside her once again. She bore down on his fist this time, encouraging him to stay.

“Mmm,” he groaned. “Slippery when wet.” It was something he always used to say in the beginning of their relationship. He wiggled his finger, then added another. “There’s nothing better.” He began to prime her, in and out, stretching her, driving her ever higher. His fist made slapping sounds as the evidence of her arousal dripped over his knuckles. He crooked his fingers to the front wall of her pussy and stroked, catching her g-spot. She curled her toes into the carpet, trying to stave off the inevitable.

H K Carlton is a multi-published Canadian author of romance and its varied sub-genres including contemporary, historical, paranormal, romantic suspense and erotica.

Many thanks HK- what a great blog- that sounds like one hot book!!