I am delighted to be bringing you a brand new voice to the erotica world today. Alaina Drake comes to the writing world with an attitude that makes me shout ‘Yippee!’

Over to you Alaina..

An amused smile spread across his face—he knew I was talking about my nightly reading. You see, I’d been telling him for months that I was getting tired of the waify virgins who saved the troubled, scarred heroes. I was tired of the random car crashes, the young women being stalked by the mafia for a silly reason, and the uber-possessive, crass men who the women inexplicably chose to “save” them. I was exhausted by the unfresh language, the inability to experiment and play with words to create the most compelling descriptions.

Then he pulled me onto his lap. “Why don’t you write what you wish you were reading?”

To that, I had no answer. Why didn’t I? I was a former English professor turned stay-at-home mom, so I was familiar with literature and the art of story-telling. But, I was constantly busy juggling all my responsibilities, and I didn’t really feel like I had a story to tell. Yet, I found myself exhausted by the ones that were already told.

I shrugged and went to bed, giving very little thought to writing my own. Weeks later, I was rocking my sick toddler, and somewhere between lucidity and sleep, my brain downloaded the first chapter of what would end up being Forbidden Touch. 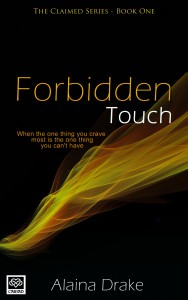 I called my husband at work to tell him he was taking our daughter on a date night that night because “mommy had to write.” There was this compulsion in me I’d never experienced before to tell the story of Beckett and Hannah, a story I hadn’t even realized my brain was working on.

That night, I wrote nearly five thousand words, and from that moment I was hooked. But I was adamant that the story I was going to tell would be different.

First of all, the characters would be divergent. The woman would be uninterested in commitment, confident, sometimes the aggressor. She wouldn’t be led around by her lust. She wouldn’t in her most lucid moments promise herself she wouldn’t go back to the controlling, frustrating hero only to do so in the next chapter at the first sight of his amazing washboard abs.

And my hero would be…gasp…nice! He’d be gracious, attentive, giving…oh, and he could also be smokin’ hot. He wouldn’t be troubled by his past, and my couple wouldn’t be playing the “I have more scars than you” game. In short, I wanted my characters to break the tropes I was sick of reading.

Was there a market for that? I didn’t know, but I really didn’t care.

I still remember to this day finishing my first draft of Forbidden Touch and hiring a professional freelance editor to look it over, a decision I will never regret. I wanted to know if what I was writing was even worth querying. (Isn’t it funny how self-conscious we writers are?) I knew I had my answer when one of her comments in the margins was, “Wow! You actually have some symbolism here!”

Why wouldn’t I? I thought to myself, and then I realized that much of what I’d read lately was sadly void of them.

But my story doesn’t end there. I queried some of my favorite presses. Some of them responded. Some didn’t. Some deemed it too literary. Too scholarly, and maybe it is for some readers. But since I believed in the story I was telling and the voice I wanted to use, I stayed the course. Then there were some, like Accent Press, who jumped quickly, untroubled by the literary bent that informs my themes.

“Are you at all worried that I will have to revise out the literature aspect?” I remember asking my soon-to-be editor before I signed. I had heard from some of my writer friends that sometimes presses will accept a manuscript only to require substantial changes after a contract was signed. So, I was worried that maybe in editing I would be encouraged to get rid of the meta-narrative and literature parallels and “get to the sex.”

Don’t get me wrong—that doesn’t mean that they can’t be hot. I love reading a smoking sex scene as much as anyone (you know, the ones that are so hot it makes you wake up your husband). But that can’t be all the novel is. The novel has to engage the mind too; after all, the brain is the biggest sex organ in the body. (Need proof? Please tell me I’m not the only one who makes up stories between the sheets).

Women’s fiction was marginalized even before the days of Jane Austen, who was criticized for writing only about women’s topics like parlors and love (like men never fall in love!). Now, though, she is canonized; in fact, in graduate school, I took an entire class that focused only on her writing. And given that postmodernism is allowing scholars to question and reinvent the traditional literary cannon, I hope that modern-day romances will be included.

I hope that my voice is one of them to join that wave.

But no matter what, I will always return to my first love: I’ll always be a reader first. I will always read through the dozens of novels that make me slam the book closed in frustration just so I can get to the one that makes me want to run downstairs in the middle of the night and pen something just as powerful.

Hannah Black saunters into the bar in her four-inch stilettos, intent on breaking her recent streak of bad dates and even worse sex. What she finds instead is sizzling hot doctor Beckett Stanton – but she doesn’t realize that he is the last man she should have chosen for her one night fling. While their views of sex and love polarize them, the attraction between them doesn’t allow either to turn away. The two play a dangerous game that tests both of their resolves, and when Hannah is given the chance to satisfy her needs, she is forced to make a decision – because the man with whom she wanted a no-strings-attached fling tugs at her heart in ways she never anticipated.

…I walked into Beckett’s bedroom with the toys in my right hand. Beckett was lying in the middle of the bed with his arms folded behind his head and his feet crossed at the ankles. While I was in the bathroom, he had cracked the window open, allowing a crisp breeze to meander through the room. The nearly sheer curtains billowed gently every once in a while, signaling another draft that pebbled my nipples. The lit candle on the armoire next to the window filled the room with pumpkin spice and fall leaves.

When he saw I was completely naked, his gaze that ran up my body turned serious. Lines appeared on his forehead, and his lips turn rigid. Sitting up and holding out his hand, he commanded, “Come here.”

I shivered though my skin was overheated. Right knee, then left, I climbed onto the bed where he pulled me on top of him so I could feel his steel cock beneath his cotton pants. His hands bracketed my head as he pulled my lips to his. His long, fervent kiss ignited me. My hips rolled against his cock with a mind of their own, my clit seeking pressure and friction. He yanked his lips away and with an intense stare said, “Show me. Show me what you do under the covers when you think of me. Do you come more than once?”…

Here is a link to Amazon where the book can be purchased:

Alaina Drake discovered her love of writing in the fourth grade when she won her first young author writing contest. After attaining a bachelor’s and master’s degree in English Literature, she set out to write novels that combine her two loves: erotic romance and classical literature. She has taught literature and writing at both the high school and college levels, and when she’s not writing, you’ll find her watching sports, baking cookies, and, of course, reading way past midnight. She is an avid rock climber and former ballerina, and she finds a lot of connection between the two activities despite their obvious differences. She lives in Omaha, Nebraska with her husband and daughter. She loves to interact with her fans on Twitter, Facebook, and on her website where she blogs about writing, reading, and the everyday joys of motherhood.

Thank you ever so much Alaina- that was a brilliant blog. Even though you are many miles away over the ‘Pond’, you may be able to hear me cheering. Not so long ago I was informed by a mainstream UK publisher, that I’d never have any success with my erotica because I wrote too well- I was too literary, and wrote as though everyone in the world was intelligent! How insulting is that- not just to me, but the entire population!! With attitudes like that in high places, erotica as a genre has a fight on its hands.