The Perfect Submissive- Just when you thought it was all over…

Knowing Her Place was the culmination of the adventures of Miss Jess Sanders, and her journey from hotel booking clerk, to professional submissive.

I often become attached to my characters, and I can honestly say that Jess became something of a friend by the end of three erotically charged, kink laden, novels. It was difficult to say goodbye. And yet, that is just what I did. I secured the loose ends, and left Jess, Mrs Peters, Miss Sarah, Sam and Lee to their own devices on the Fifth Floor, within the Fables Hotel.

And so- when Xcite approached me a couple of months ago and asked if I’d like to write one more Perfect Submissive tale- I had to think very carefully. After all, I had finished the story. The endings were ended, the knots were tied…did I really want to visit Fables again?

Of course I did! But I knew that to write another novel would be stretching the story too far, and could even devalue the trilogy as it stands now. However, there was one strand of the story I always wanted to add- and so one last (very final) Jess Sanders adventure is in production.

Keep your eyes peeled next February for a brand new short novella based in the Fables Hotel….

And now, if you’ll excuse me, I’ll just nip off and write it!!

If you want to read the trilogy so far, you can find them all on Amazon, and all good paperback and eBook retailers.

What’s Going On Behind Closed Doors?

I was recently asked what the major driving force of inspiration was behind my writing. There are many things that influence me; overheard conversations, musical lyrics, friend’s fantasies; but at the very back of all that is a basic curiosity- a curiosity that always wants to know what is going on behind closed doors.

Not that I’m an eye to the keyhole sort of person (like Maggie in my story Through the Crack; Quick Kink Two). Nor would there be any point in me jamming my ear to the crack in the door (I’m deaf as a post); it’s more that I can’t stop my imagination from filling in the blanks.

What could the top floor of a nearby hotel really contain? Is it full of nice normal bedrooms, in which tired out members of the business community can crash after a meeting? Or is it, as in my series, The Perfect Submissive Trilogy, a hotbed of private services and kinky sex?

When you see a sign on a lift saying ‘staff only’ where does that lift actually take you? When they announce over the loud speakers in the shop or club ‘Would a member of staff come to the storeroom,’ what happens when they get there? Are they sold to aliens for experimentation? Is there some erotically eccentric Sheik waiting to whisk them away to his harem? I always hope they aren’t just going to do something as dull as unpack boxes. I want them to have as much fun as the bar girls, and the young man they lure into their storeroom, in my story Break Time (The Collector)

When you meet a stranger on the train; a stranger who catches your eye and sends your pulse racing- what would happen if you asked them out? Would you have coffee, maybe visit the cinema- or would you find yourself in the backroom of an exclusive club, doing sexually interesting things you hadn’t ever dreamt about, like the lead character in my story Black? (Yes Ma’am)

So basically I’m nosily inquisitive- but only for what might happen- not for what really is happening- it’s far more fun that way!!

When you think of Scarborough, many good things jump to mind. From waves to fish and chips but I don’t suppose erotica is automatically one of those things. Well on the 14th June this year for the second time Smut by the Sea will take place at Scarborough library and it’s going to get really smutty.

It’s a fun gathering of like-minded folk and if you want to attend you can pick up your tickets here. It’s £20 for all day and that includes your buffet lunch. A complete bargain.  All the details you need can be found at http://smutbythesea.co.uk . There is still room in the reading slam, so if you’re interested in joining in with a 5 min reading (not a moment more or you get spanked!) then drop Victoria a line.  Victoria @victoriablisse.co. uk (no spaces) and she’ll pencil you in!

If you live in a far flung corner of the world and can’t make it to Scarborough you can check out the advertising options so you can be with us in spirit. We’re also still looking for sponsors, if you or someone you know wants some fabulous, focused promotion then check out the Sponsor options.

The Smutters look forward to seeing you there! (including me!!) 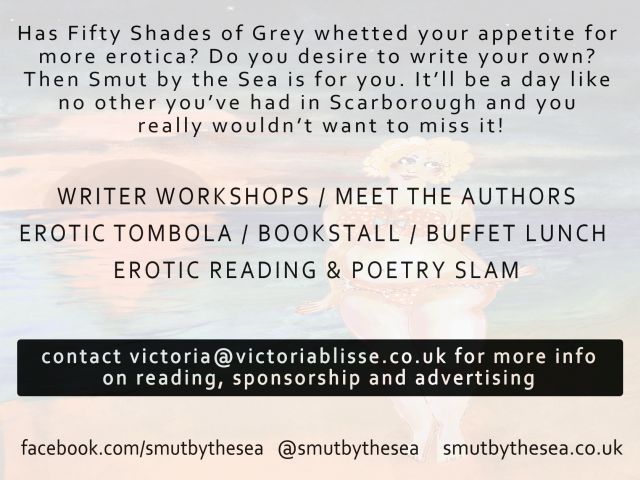 The Initiation of Miss Holly by KD Grace – A Review

I haven’t had time to do many reviews lately, what with finishing up The Perfect Submissive Trilogy and starting my latest Jenny Kane book, so I thought I’d pop back through my archive and remind you of a few books that are, in my opinion, just that little bit head and shoulders above the rest.

Today seemed a timely moment, with the re-launch of The Initiation of Miss Holly by Kd Grace, to take another look at my review for this outstanding novel… 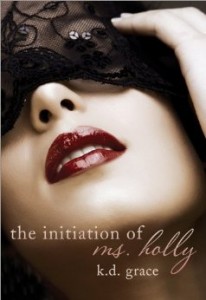 What would you think about if you were trapped in the dark in the Euro Tunnel, with no prospect of reaching your destination for some time? This very real occurrence sent the erotically tuned mind of KD Grace on a literary journey, which lead to the creation of her amazing first novel, ‘The Initiation of Miss Holly.’

The concept of The Initiation of Miss Holly is a simple one. What would happen if you were unable to see your lover? When Rita Holly is trapped on the Euro Star, and first encounters the mysterious Edward, the blindness they experience is enforced by an electrics failure. When Rita agrees to meet him again however, at the posh dance club and restaurant, The Mount, Edward’s insistence that she wear a blindfold all the time they are together, both intrigues, terrifies, and arouses her. As they share a dinner, in which Rita can only imagine what her host looks like, he offers her the chance to take part in a very special game – to become a member of a secret sex cult…

The Initiation of Miss Holly allows Rita to have as much sex as she wants, but not with the one person she most wants it with…not with the all powerful Edward. Instead, she is taken on an eye opening journey, as she learns to cope with, enjoy, and endure, the techniques of the vicious bitch Vivienne, the mouth watering Morgan (I will not spoil things for you- but I would recommend employing an extra amount of concentration when reading Chapter 13), the human zoo presided over by the intriguing Leo, and a host of other deliciously enticing characters and kinky encounters.

Only if Rita Holly completes her journey, will she be considered worthy by The Mount cult’s council, and be granted what she wants more than anything – to see the face of Edward…