As we reach the end of the first week of my Tasty Tasters series, I am honoured to welcome one of my personal heroes from the world of erotica. Sit back and enjoy this wonderful extract from the pen of the incomparable Ashley Lister.

Over to you Ashley…

When baking entrepreneur Trudy Cole falls for celebrity chef Bill Hart, all is far from sweetness and light. Instead passion, betrayal and ambition makes for an explosive mix in the high stakes game of gourmet dining.

Trudy Cole is an aspiring chef with ambitions to own her own patisserie. When she encounters celebrity chef Bill Hart she finds the older man antagonistic but disconcertingly attractive. Sexual chemistry soon boils to an unbearable temperature and they become lovers.

But Trudy’s affair and ambitions for her own business become too hot to handle when she discovers that Bill has a wife. To make matters worse, her business partner and ardent admirer, Donny, threatens to destroy her patisserie and Bill Hart’s reputation.

At a stately home where Trudy wants to woo investors with her culinary masterpieces, the paths of all three players cross again and the heat is turned up to a much higher setting… 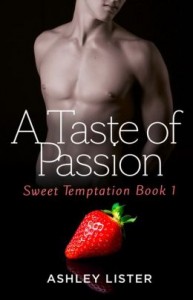 This taster is one of the early chapters from A Taste of Passion, book one in my series Sweet Temptation. This is the first chapter where Trudy gets a chance to meet the restaurateur, Bill Hart.

Trudy’s spent an evening waiting in his restaurant, Boui-Boui, trying to talk to someone about the ingredients in a muffin she’s sampled. The staff have been trying to get her to leave and, eventually, they’ve turned the lights off and locked the door. But now, in the unlit restaurant, a stranger has taken the seat beside her.

Her heartbeat quickened. She had no idea who he was. Had she been left alone with the restaurant’s security detail? Her grand idea of remaining at the table, until the restaurant’s staff were forced to deal with her, no longer seemed like such a clever strategy. A slick sheen of sweat moistened her palms. Her mouth was almost too dry to talk. She started twice before finally finding the words.

“These muffins,” she began. It took every ounce of effort she possessed not to stammer. She willed herself to appear in control. Even though it was dark and even though she didn’t know who she was talking to, Trudy felt the need to exude an air of contained professional calm. “These muffins are delicious.”

“I know. Everything I serve here at The Boui-Boui is delicious. Now, tell me, what do you want?”

It was too dark to see who he was. He was simply a suggestion of shadow against the blackness of the unlit restaurant. His voice had a northern twang to it that reminded her of the blustering heroes from hardy TV shows and gritty films. It was an accent that suggested the words were spoken by someone with no time to tolerate whimsy, artifice or fools. They were plain-spoken words from a plain-speaking man.

His accent trilled softly against her ear like the rasp of a favourite blanket. Maddeningly, she knew his voice was one she had heard before and that she knew well. She racked her brains, desperately trying to think where she had heard it and how she knew this stranger.

“What do I want?” Trudy repeated. It was difficult to believe that the full details of her request had not been passed onto the senior kitchen staff. She brushed past that detail refusing to let her ire show. “Perhaps you might be able to tell me?” she began excitedly. “Are you the pâtissier?”

Even as she asked the question she knew that wasn’t correct. The waitress had told her that the pâtissier was a woman called Kali.

“No. I’m not pâtissier. I’m head chef. This is my restaurant.”

“Unless he owes you money, yes.”

Her heart had been racing before. Now it thundered so loud she was sure he would be able to hear it in the darkened silence between them. “It’s an honour to meet you, Mr Hart. You came to the university and delivered a seminar. It was most inspirational.”

He grunted as though the matter was of no importance.

“What do you want?” In his broad accent the question came out as: Waz tha one? “It’s late, I’m jiggered and, whilst I’ve got no problems locking you in here for the night, I’d be better suited if you simply chuffed off back to where you’ve come from. Let those of us who work for a living get some shut-eye.”

She tried squinting at him in the darkness. His dialect and unfamiliar word choices made it difficult for her to work out if he was angry or amused or possessed by some other emotion. If there had been better lighting between them she would have been able to read his eyes and establish if he was sincere in his threat to lock her inside the restaurant.

“I wanted to learn something about the ingredients in your citrus and blueberry muffin.”

There was a moment’s silence. “Are you lakin’ with me?”

She shook her head and then realised he wouldn’t be able to see the movement in the darkness. “I don’t think I’m laking with you. I’m not fully sure I understand what that means.”

“Lakin’?” He sighed. “Are you joking? Are you playing with me? Are you having a laugh? Are you messing me about? Did you really spend your entire evening sat at this table because you wanted to know what’s in one of my blueberry muffins?” He chuckled dourly and added, “I’ll tell you now, lass, the answer to that one was buried somewhere in the question.”

Trudy frowned. She could tell he was mocking her and she supposed her unorthodox behaviour did merit some level of derision. Nevertheless, she was determined not to be dismissed as a foolish blonde who hadn’t worked out that a blueberry muffin contained blueberries.

“I recognise so many flavours in this product,” she said quickly. “I can taste the organic, free range eggs. I can taste hand-milled wheat as well as blueberries and citrus zest.” A revelation suddenly came to her and she said, “I’ve even worked out that those sugars that were initially confusing me are an acacia honey.”

He drummed his fingers on the table.

Her vision was beginning to adjust to the lack of light in the room and she could see the lines that weathered his face. His eyes were wrinkled by the suggestion of constant smiles. She could see he had raised one steel-grey eyebrow, as though encouraging her to continue. She wanted to believe he was grudgingly impressed with her abilities but the lighting in the dining area was too dim for her to read much from the shadows that cloaked his face.

“Well done,” he said drily. “You can taste flavours.”

“But that’s the problem,” she insisted. She quashed the urge to let him hear the impatience in her tone. “I can’t name all of them. There’s one remaining flavour that I haven’t yet been able to identify. That’s why I’m still sitting here. I need to know the identity of that missing ingredient.”

His smile glinted brilliant white in the shadows. The darkness made it impossible for her to see if there was any kindness in his eyes. The expression made her think of a shark on the scent of blood.

“When I delivered my seminar at your school-”

He waved a hand as though the distinction was unimportant. Continuing without pause he asked, “-can you remember what I spoke about?”

She didn’t have to hesitate. The lesson he had imparted on that day had been one that matched her own beliefs about the ideals of cuisine. Goosebumps bristled at the nape of her neck as she remembered William Hart delivering his message to her and a lecture theatre of two hundred students.

“It sounds sexier when you say it,” he admitted. “But, despite the respect you clearly have for flavours, you still don’t recognise that added flavour in my citrus and blueberry muffin?”

She started to shake her head and then stopped. It wasn’t that she didn’t recognise the flavour. She did know it – or something similar. Her chest began to swell as she realised why she had associated emotions such as excitement and happiness with the flavour.

It was a Christmas flavour.

Her brow creased as she tried to recall all that she had learnt about cinnamon and apply that knowledge to her memory of the flavour in the blueberry and citrus muffins. “From the cinnamomum tree,” Trudy remembered. “It’s not one of the more common variants of cinnamon like the Indonesian or Vietnamese.”

She watched his silhouette nod approval. “You do know your stuff.”

Hearing those words from the lips of William Hart, growled in his impenetrable northern voice, was almost more impressive an accolade than the honours degree that she had received earlier in the day. She knew, when she finally retired to bed this evening in the house she shared with Charlotte and Donny, Hart’s sincere praise would be at the forefront of her thoughts as she drifted to sleep.

Trudy stroked her tongue along her teeth. Now that she knew the identity of the flavour she felt as though she would be able to recreate the muffins in her own kitchen. It took an effort of self-restraint not to leap from her seat to hurry home to start baking. Of course, she reminded herself, she wouldn’t be able to make a start until the morning, after a trip to the local market where she could maybe track down a specialist spice supplier who might stock Sri Lankan cinnamon, but-

“Thank you,” she said earnestly. “Thank you so much for sharing that with me. I don’t think you know how much it meant to me.”

His silhouette shrugged. “I can see we share a passion. I enjoy sharing things with people who share my passions. I assume, since you’ve hung around here this long, you have time to let me show you my kitchen?” 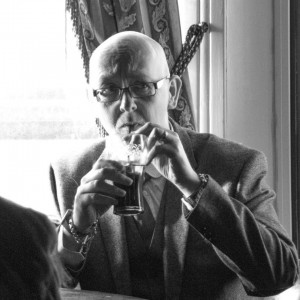 Huge thanks to Ashley, for sharing such a brilliant extract.

Don’t forget to come back for the start of the second week of tasty tasters tomorrow, when the gorgeous Lexie Bay stops by.