As you’ll know if you follow this blog, I just love to have guests come and visit. Today I’m delighted in welcome one of the newest voices (pens) to the Xcite stable- Toria Lyons. I’d like you to be EXTRA nice to Toria, because today it’s her birthday!!

Oh- and you may notice, she has a bit of a thing about rugby…

Over to you Toria!! 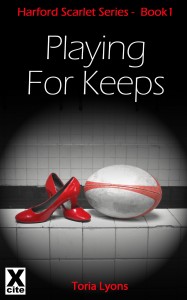 Does Your Mother Know?

[ABBA – Does you mother know?]

Now that I’ve given you an annoying earworm for the rest of the day, I suppose I’d better introduce myself. This is my first time guest blogging, so please be gentle with me.

Yep, you read that right: my mother is my beta reader. I can’t quite believe it myself.

I shouldn’t really be surprised – it was her old Mills & Boons and Georgette Heyers that I started reading at the age of 13, after I’d gobbled through all the rest of the books in the house. To be fair, she tried to stop me, but I would read anything I could get my hands on. Plus in those days, Penny and Georgette didn’t have to imply that sex happened, it really didn’t. Women didn’t even have to reveal they were virgins, it was taken for granted that they were. Men were strong, women were…not as strong, and it didn’t take much to seduce them. I can’t remember a single ‘heroine’ doing something truly brave or fighting a ‘convenient’ marriage (although I could be doing the Heyer novels a disservice; it has been a long time). Unfortunately, this is still the case with many similar novels. But who wants a wet so-called heroine?

*halts tangent/rant right there and takes a deep breath*

Oh yes, my mother becoming my beta reader. My taste in romances diverged from my mother’s a while ago, when I would be picking up the racier choices at the library, and she would be heading for the historicals and gentler sort. So, she wasn’t an immediate choice for a test read of ‘the ultimate rugby bonkbuster’ or an ‘enjoyable and fruity rugby-themed romp’ (http://www.walesonline.co.uk/news/news-opinion/gareth-thomas-eddie-butler-quest-7918535). Plus the cringe factor had the potential to be overwhelming.

‘A lot of debut novels draw from the author’s life experiences,’ says Toria Lyons. ‘Mine’s about rugby and sex. I’m not saying any more as my mother may be reading this.’ 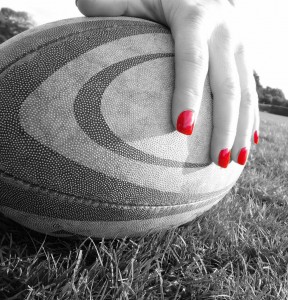 Would you let your mother read what you write? How did it come to this?

Most erotica authors seem to agree when starting out, that most difficult thing to get is feedback. In fact, in conversations I’ve had with other writers, we’ve agreed that erotica just isn’t reviewed as often as other genres. How do you get an honest viewpoint on something you’ve poured a bit of your heart and soul into, but is a little ‘naughty’?

I’d already exchanged contracts with Accent/Xcite for my first novel, Playing For Keeps, which I’d written sans feedback. I needed feedback for the second novel, Playing Around, on some parts of the plot I wasn’t entirely sure about. I needed a beta reader, or just someone who would give me an opinion, any opinion.  I’d tried all of the forums, even offered my reading services in exchange, and had no joy. I’d asked one of my sisters at an earlier date and just found out that I ‘was unkind to blondes’. That didn’t really help.

I knew my mother wanted to read it, to help, but I was still embarrassed about the sexy bits. As a possible solution, I said I would ‘grey out’ those areas, or remove them. I tried doing this, I really did, but there were just too many sexy bits, and the story didn’t make sense without the passion!

So, cringing greatly, I sent her the first few chapters. A few days later, she sent them back with feedback. Probably not as critical as I had hoped (she is my mother after all!), but it was great to finally have something to work with. However, I had thought we’d come to some semi-official agreement that she wouldn’t read the sexy bits, that she would skirt over them. Until I discovered a correction right in the middle of one particularly explicit paragraph. She’d read every single word.

If I could have died with embarrassment at that moment, I would have.

That next phone call was a touch awkward, as you can imagine. But, as time has passed, I’ve learnt to live with it and realised how lucky I am. My mother’s retired so has the time to do it, and she enjoys reading, so why not? And to be honest, she’s pretty good at it, at picking up things that others have missed. I forwarded the edited proof of Playing For Keeps to her and she pointed out my misuse of Scots/Scottish and other little quirks that I had no idea about. She’s great as a proofreader too. And a general cheerleader, and someone to bounce ideas off.

She’s still not reading my more explicit work though! I have to draw the line somewhere (and the line is between the front bottom, and back bottom).

So, my mother knows. Who else?

All my friends. Is this unusual? It appears so. In conversation with other erotica writers, some haven’t even told their significant others, some have multiple email accounts for their writing personalities, many are unsure how people will react.

My situation is slightly different to most: I have a disability which means I can’t work full-time and it greatly limits what I can do. Friends and family have accepted that I’ve found I can be productive at, and they’ve encouraged and supported me.

There are three main aspects of my life at the moment, which usually come up in conversation: writing, my disability, and cycling. I’ll willingly talk about all three, but the latter couple usually involve getting emotional, too serious and/or frustrated (‘red light jumpers’, whether on a bike, in a motor vehicle or on foot, piss me off too). That’s rather a mood killer when you’re having an enjoyable few pints in the local rugby club. Whereas writing is a safe haven in comparison. Plus I can get all kinds of ideas and inspiration from their responses.

In fact, most are upset that I haven’t written a book about them already. Some insist I already have (http://www.torialyons.co.uk/2014/09/30/its-really-not-about-you-honest/).

Which brings me along to you, my fellow writers and readers:

Does your mother know? 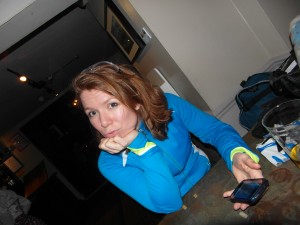 Many thanks for coming to visit today Toria- and HAPPY BIRTHDAY!!