I’m delighted to welcome Deana Carroll to my blog today. I was fortunate enough to meet Deana last October at the brilliant Smut Manchester, and I’ve wanted to feature her work on my blog ever since.

Over to you Deana… 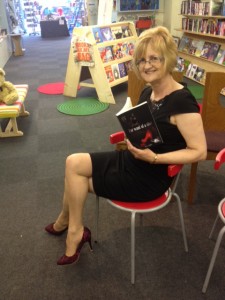 I was brought up to be a very sweet and innocent young women and I married a very polite young man, hoping that everything would change afterwards! Sadly, I was very much disillusioned. My new husband seemed to love music and booze much more than sex, so I used to immerse myself in my own private fantasies to satisfy my needs.

Some fifteen years later, on a night out with my girlfriends I met an incredible man. I was thirty seven and he was nearly forty two and had the most amazing blue eyes and osculatory skills ( he said he used to practice his kissing technique by rolling his tongue around yoghurt cartons.) I was instantly smitten and filed for divorce within months of meeting him. I would like to say we ran off into the sunset together and lived happily ever after, but he didn’t want to commit to me and I understood his reasons. He did, however, stay in touch with me for the next fifteen years. I would write sexy emails, poems and stories to hold his interest and when we met up every six months or so, I would turn into complete mush as soon as I saw him. I’ll leave the rest to your imagination, but the experience that followed in his company was always mindblowing.

In 2001 I discovered the iconic book Story of O by Pauline Reage. I was blown away by this book. This lady echoed the secret dark fantasies that I had only to a much darker level. I absolutely loved the sensual way that she described her experiences and the way she pushed her own physical and mental barriers. I shared some of my stories and poems with my friends at work and they loved them so when Fifty Shades of Grey hit the world in 2012, I was inspired to revisit a half started story, but this time I was driven to complete it into a full length book.   That in itself was the start of a new journey. I had only studied English to O’level standard so my initial manuscript was very naively written. I joined a writing club who introduced me to a great editor and I am also taking creative writing classes which I absolutely love.

I loved reading fairy tales when I was a child, particularly Hans Christian Andersen. His story, The Red Shoes haunted me the way a pair of shoes could be so malevolent and lead the poor girl Karen down such a devastating spiral, and this story inspired me to write my book, For Want of a Shoe. 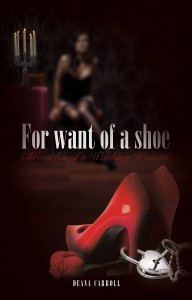 Abi gripped the post in the Pleasure Room, gazing at the dust motes suspended in a shard of sunlight, while Lester pulled and yanked the back ties of her corset. She had worked hard cleaning the farmhouse all Saturday, and Lester had been very impressed by how spartan her bedroom looked after she had cleared away her clothes and pushed her suitcases out of view under her bed.

“Would you like a surprise, for being such a good girl?” he whispered in her ear, as he tied the ribbons into a tight bow.

“Depends what it is.” Abi humoured him, her earlier petulance dissipating.

“I’m going to blindfold you, and then I’m going to do wicked things to your body. Would you like that?”

“Just a bit.” Abi giggled as she let Lester slip a velvet sleeping mask over her eyes. He reassuringly kissed her upturned mouth before gently lowering her onto the bed. Her left arm was drawn behind her head and clamped at the wrist in a fluffy handcuff, hanging from the metal grille of the bedhead. He kissed her mouth again, his tongue meeting hers. Abi wrapped her free arm around him to pull him closer to her body.

“Not so fast, young lady!” Lester murmured, extricating himself from her grasp. He drew her other arm towards the right post and secured her wrist in a matching handcuff with a quick click. “Now you can’t stop me…”

He kissed her mouth again before moving his hands down past her waist to the top of her left thigh. He deftly unclipped her stocking, slowly unrolling it down her leg, and tugged it off her foot. Abi bit her lower lip with anticipation as she felt him knot the stocking around her ankle and tug her leg to an angle as he fastened the stocking around the bed post. He stroked the inside of her bare thigh, watching her quiver under his touch, “Ready for your other leg?”

She felt Lester unclip her other stocking and roll it down her leg, acquiescing as he knotted the stocking around her ankle, pulling her leg taut to the other bedpost.

He let his fingertips tease the inside of her thighs before crouching between her spread-eagled legs, his hot breath preceding his tongue. Abi sighed and swivelled her hips as Lester rolled his tongue around her exposed labia in a leisurely manner, teasing her ring and tasting her juices.

A heavy vehicle pulled up on the forecourt outside, the gravel popping and cracking in its wake.

“Lester!” Abi called out in alarm.

Ignoring her, he opened the door to greet the newcomers, then clicked it shut behind him. Abi strained her ears to hear the conversation outside. She heard the door of the vehicle wrench open and then low voices.

“What do you think?”

“Well then, let’s get it shifted.”

Abi listened to the grunts and curses of two other men as they unloaded a seemingly heavy item and manoeuvred it towards the kitchen door of the farmhouse, and then silence.

Abi was curious. Lester hadn’t mentioned he was expecting a delivery. She shifted her head on the pillow. The sleeping mask held tight. She tutted in exasperation.

A fly landed on her bare stomach. She shrieked with shock, causing it to buzz frenziedly above her. Damn Lester and damn the delivery. He certainly picked his moments. Why couldn’t he wait until the delivery had been made before taking her to the Pleasure Room? She pondered again on what he had chosen to order and, more intriguingly, why it was being delivered on a Sunday.

The fly hovered around the gloomy space, seeking an exit, before head-butting the window pane with sheer frustration.

Abi tried to remain calm. She counted to one hundred and then counted all over again.

The kitchen door opened, and she heard voices again.

“Do you think Les is fucking that PA of his?”

Abi’s ears pricked up when she realised they were talking about her, instantly recognising the voices as belonging to Mike and Andy, the engineers who had teased her when she was new to the company. What were they doing here?

“He’s gotta be. Haven’t you noticed him bringing her into work?”

“Can’t blame him. I would too. She must have a cunt like a horse collar!”

Oh, please! Abi shuddered as she continued to eavesdrop on their conversation.

“Whatcha think’s in that building over there?”

“No, I want a looksee. Les was in there when we got here.”

Footsteps crunched in the gravel, as the two men lumbered towards the Pleasure Room.

Petrified, she inwardly screamed, Lester! Get these guys away!

Their voices grew louder as they approached the window. Abi stayed as still as she could, her heart thumping, blood pounding in her ears.

“Can you see anything?”

She heard them step away, and then came the menacing crunch of gravel as they both tramped around the building.

She panicked, breathing hard as she heard the door creak open, steeling herself for what would follow…

Deana Carroll, currently lives with her son and cat in a pretty house by the pinewoods in Formby, Merseyside.

She worked as an administration officer in the Civil Service since leaving school and has written many poems and short stories for personal pleasure. She was brought up with very moral values, but discovered after her divorce in her mid-thirties, that being immoral was much more entertaining!

In 2012 Deana needed to take several months off work due to a mystery illness.  During that time she resuscitated an abandoned story that lay festering at the back of her wardrobe. This time the ideas flowed and the initial two thousand words quickly expanded to sixty thousand. This book, For Want of a Shoe, contained everything that Deana loved; shoes, chocolate and most of all, adult fun!

Many thanks for such an honest blog, and such a great extract Deana,