It’s time for another in my interview series, ‘My First Time.’ Today I’m delighted to welcome to Zander Vyne to talk about her early erotica writing experiences.

I had a fabulous creative-writing teacher in high school, so I began writing things I liked way back then. But, it being a school situation, I didn’t feel free to fully express myself in writing until much later in life. The first story I wrote with that sense of creative freedom was an adult fairy tale called Amethyst’s Feather. On surface, it was about a princess expected to marry and love the right kind of man who secretly longs to be with a mysterious man she’d met as a child. On her wedding day, she runs from the church, breaking free from convention only to discover her dream lover is an immortal beast and not a man at all. But she loves him anyway. It’s a morality tale which was actually a break-up letter to the person I wrote it for, to convince them to choose the beast over me (the more obvious choice). 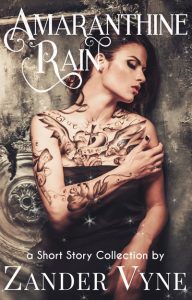 Amethyst’s Feather turned out to be the first story I sold. It was erotica, I thought, but a member of the writing group I belonged to at the time told me it was not erotica at all. My story contained “rape” and “beastiality” she said. She strongly discouraged me from submitting the story and warned that the editors would be horrified and never work with me again if I broke their “rules”. Instead, I wrote the editors, explained my dilemma and storyline and was asked to submit Amethyst’s Feather. They bought it, and this was the beginning of a long association with one of the editors. To my knowledge, the lady who found my story so offensive never went on to publish anything. 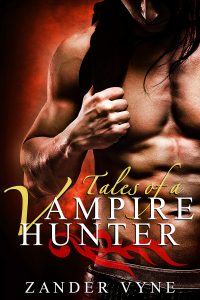 Writing erotica created issues with my family and friends. This was before FSG made erotica “okay” for all but the most uptight people. I saw most of my writing as mainstream, literary . . . more like Anais Ninn, Henry Miller, and other current, popular authors. Though I wrote my fair share of porn, most of my work was more about the impact our relationship with sex has on us as people and less about the sex itself. But it turned out most people didn’t feel that way in my Midwestern suburban community of Catholic girl-scout moms. Suddenly, I was a peddler of porn. One step removed from a paedophile. It was hard to take at first, but ultimately, their narrow minds opened mine and made me more determined to stick with writing what moved me, regardless of what anyone else thought. It encouraged me to be even more shocking. I worked in the film business for a long time and learned when people react strongly to you, you’re doing something right. I did stop talking about it while I grew a tougher skin and learned to write to please me and not others. Just to make life easier for my kids, I keep my pseudonyms separate and seldom discuss my writing with the soccer moms in my ‘hood or members of my family who are not supportive. I also support other writers with a vengeance through writing groups, workshops, encouragement, and help through many entities, including blogs, a small press publishing company, and an author services company.

Not at all! Though Amethyst’s Feather did push buttons, and explore topics that made some uncomfortable, it was really a morality tale . . . a fairy tale. Possibly the only one I’ve ever written. Now, I tend to try new styles, new genres, and new ways of expressing ideas. I love complex stories told using sparse language and writing that challenges me as well as the reader. 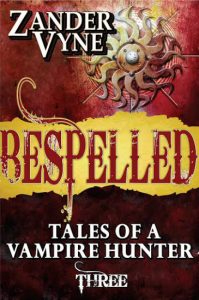 I am working on finalizing print versions of my Tales of a Vampire Hunter novellas as well as an omnibus edition combining all three books. The publishing company is forming imprints and working with several clients in various genres. And I am writing a fun mainstream novel under another name as well as developing a grizzly thriller with my writing partner and a YA novel about a teenager’s murder in a small suburb very similar to the one I live in. Like much of my erotica, the surface story will be about one thing, but underneath, it’s a book about the way people judge others and think they know people, when actually few of us ever truly know others.

Bespelled: Tales of a Vampire Hunter 3 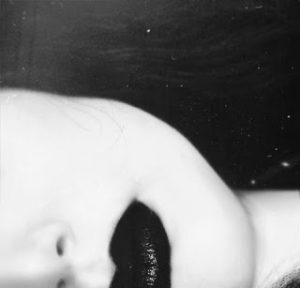 I used to let people think Zander was a he, to sell more stories, and because it was fun having a penis (even if imaginary, those things are the shit).

Fears – big ass spiders (because, really . . . a spider in your ass is scary as fuck); Bad punctuation (recurrent nightmares about it creeping into finished books)

Loves – weird people, head-banging music (extra points if made by a woman), sailing (lived on a sailboat for five years), used-book stores

Best job I ever had- (besides writing, which is not a job, but a love) working in a movie theatre

Many thanks Zander- fabulous interview!

Smut by the Sea 2016: Sponsored by Godemiche – Are you going to Scarborough Fair?

Curious to the Core!