It’s Day 10, and today we are joined by the delicious Tabitha Rayne, who is leading us to The Meeting Point, (Book 3 in The Clockwork Butterfly Trilogy).

A story of love, freedom, and the future of mankind.

Deborah Regan has broken free from the prison where she’s been unjustly held for the past eight years. The scale of the devastation to the land outside is overwhelming. Toxins have taken hold, and the planet is dying. Deborah vows to find her lover Marcus and flee to the safety of the hills where their story first began.

Marcus is one of the few remaining men left on earth, and Deborah finds him held captive at a pleasure farm where he is kept to service rich and powerful women. Escape for him is complex and dangerous. They can only hope that the trio who helped Deborah before will come to their aid. Marcus has heard from his clients over the years of a mythical place with its own microclimate that toxin clouds seem to miss. He is sure they can find it and will be able to build a future together.

Mae, Lena, and Angelo feel compelled to find Deborah and Marcus who they know have a special connection that might prove essential to their survival. They make haste to track the couple and realize the plan they have chosen is fraught with danger and conflict.

Will they make it to the utopia Marcus dreams of?

(Content Warning: contains graphic sex scenes with multiple partners, including m/f and f/f sexual interaction, strong language, and end of the world shenanigans – This is the explosive climax to Taking Flight and A Clockwork Butterfly.)

Lena wriggled her toes on the pebbly river bed, parting her legs as she did, feeling the rise of her arousal swish and sway in the current. Her arms trailed out languidly over the surface, and she lifted her tits out of the water for Angelo to view her unbearably tight nipples.

He did. He was standing on the river bank fully erect now, and his eyes shifted from Mae’s chest to Lena’s and his fingers wrapped around his cock. Mae looked to Lena and winked, taking her own nipples between her fingertips and pulling them, making Angelo wank harder. Lena did the same, relishing the display from both her lovers.

The fact that the older couple was still watching them didn’t bother Lena at all. In fact, she threw them a sideways glance and was amazed to feel turned on as Hazel caught her eye and smiled. The effect on her pussy was incredible. She wanted to put on a show for them. She wanted to give them the pleasure of watching a sex show, the same way they had just given one to her and her lovers.

Lena released one of her nipples and moved closer to Mae, smoothing her fingers down over the woman’s back then buttocks. Mae sighed and let her head fall back a little while still watching Angelo. Lena’s fingers probed between the crease of Mae’s buttocks and found entry between her thighs. Lena separated the flesh and fingered Mae, astounded at how she could feel the slippery wetness even in the water. Her middle finger was swallowed up into the woman’s hungry cunt and a growl released from her throat. Lena was so turned on now, she craved touch, and she pulled Mae’s hand down to her own pussy and held it on her mound, pressing it hard, humping the fleshy heel of her palm while fingering Mae.

Mae bucked and pressed against her, twitching her ass into Lena’s hand. Fluid leaked and mingled in the cold water, and Lena pulled out her finger and ran it up to the pucker of Mae’s asshole. There was resistance at first, so Lena leaned in to Mae’s ear.

“Let me in, you little tease.” Her words must have hit the spot and Mae groaned, spreading herself for the invasion. Lena pushed quickly and firmly and eased her way into Mae’s tight ring. Angelo was still watching, and Lena wondered if he could know what was going on, but by the crazed, lusty look in his eyes, he must have had a good idea.

“Angelo, get in here and fuck me,” demanded Mae as Lena’s finger slipped further into her ass. He didn’t need to be asked twice and made a perfect shallow dive, barely a splash, and swam under the water to them, surfacing between Mae’s tits.

“My, my, what do we have going on here?” He was hoarse, obviously trying to ignore the ferocious cold.

“I’m having my asshole fingered by my lover and I want you inside my sopping cunt, right now.”

Lena’s cheeks flushed. Mae always knew how to make her feel the tip between shame and arousal. Angelo smiled at her past Mae then pulled the two women toward him.

“Your wish,” he said, and Lena felt pressure on her fingers, through the walls between her lover’s intimate passages, “is my command.”

And with that, he lifted Mae onto his dick and slid right up inside her. Lena could feel every millimeter as it went in and was glad to still have Mae and her other hand clamped to her own cunt. She was so aroused now, her hips seemed to be bucking of their own accord as the fucking intensified. Just as she began to surge and soar on her climax, she glanced over at Birch and Hazel who were kissing passionately. As she watched their hands masturbate each other, a white light engulfed her and she came hard, bucking her pelvis into Mae’s hand as her tight asshole clutched and suckled her finger.

At the serene height of her orgasm, she sensed others around her, darting through her quizzically, but oozing love. One, two, three of the entities passed through her then suddenly everything dimmed and a great sorrow washed over Lena. She came to as Mae and Angelo thrashed and climaxed together, growling and tearing at each other with desperate grabbing hands.

Lena was sated, but bewildered. She looked over at Birch and Hazel who also looked a little puzzled.

“That was fucking amazing!” shrieked Mae, her face shining with post-coital glory. “Now can we please…get…out…of…this…f-f-fucking freezing river?” She made to move forward and Lena pulled her finger free.

Once they were shivering on the bank, hopping around to try and get dry, Lena went over to Birch and Hazel.

“What was that? Who was there? I felt so sad—like something had left me.”

The older couple acknowledged that they shared the same feeling, but offered no explanation… 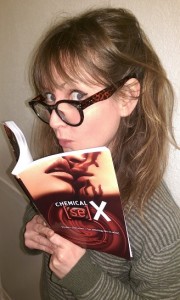 Many thanks for such  great extract Tabitha! Before you all rush off to The Meeting Point of your choosing- just a quick reminder that there will be another Tasty Taster along tomorrow. The gorgeous Victoria Blisse will be here to tickle those erogenous zones…