I’m delighted to welcome the fabulous H K Carlton to my place today with her brand new novel, The Devil Take You.

Over to you Kymmie… 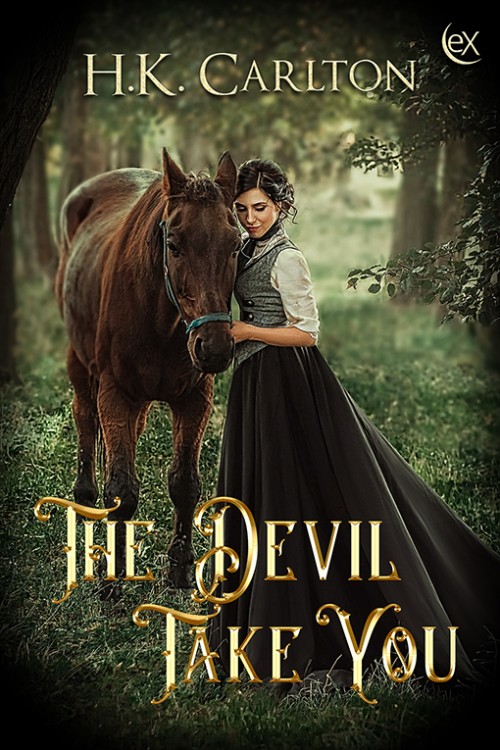 The epic Historical Romance – The Devil Take You – is out now!

Hi Kay, thank you so much for having me back. I’m delighted to be here. I’m celebrating the re-release of Scottish, historical, romance, The Devil Take You, which after a brief hiatus has found a new home.

I hope you and your readers enjoy the following excerpt of Gard and Brae’s first meeting. Grad Marschand is known in the Highlands as the devil. In this excerpt, he affirms his namesake. And that is what I loved about writing this story. Gard is not your typical historical romance hero, in fact he is the anti-hero. He is a bad guy—so focused on his own vendetta that he is driven to commit deplorable acts to regain his due.

So, how do you redeem the irredeemable, and turn him into the hero of your historical romance? (You don’t really) but you do place a feisty Scottish lass in his way, because what else can turn a man around but true love. You’ll relish his resistance and inner turmoil, caught between his burgeoning, foreign feelings for Brae, and his deep-seated need for revenge. He takes out his frustration on Brae—and a cast of other lovable, and not-so loveable characters—and treats her abominably, which makes their clashes quite entertaining.

But don’t be fooled, Gard is not one of those reformed rakes who as soon as he finds love, turns into a simpering lovesick fool. Oh no, even Braelynn can’t tame the devil that lurks within. But I guarantee you’ll fall in love with Gard and Brae and cheer them on.

The Devil Take You, is set in 1307, against the backdrop of extreme political unrest during the Scottish Wars of Independence and in the years following William Wallace’s execution and the year of the death of King Edward the First—Hammer of the Scots—this tale will sweep you away. I hope you enjoy reading it, as much as I enjoyed writing it.

Braelynn Galbraith wants peace for her beloved Scotland, marriage to her childhood sweetheart, and a house full of children. In that order. But evil incarnate, in the form of Gard Marschand, turns her life inside out and destroys all hope of a decent marriage.

Known in the Highlands as the legendary devil, Gard Marschand raids his way across Scotland and England amassing power and property in his malevolent wake. He will stop at nothing in his pursuit to regain what is lost— even conceal his true identity and associate with his enemies. His determination is all-consuming until he and his men lay siege to Ross-shire and one feisty Scottish lass obliterates his single-minded purpose.

Can Gard abandon his deep-seated need for revenge for a love that just might save his rotten soul? Or will he succumb to the demons that hound him and surrender to the devil within?

I believe your stay in purgatory has only just begun… 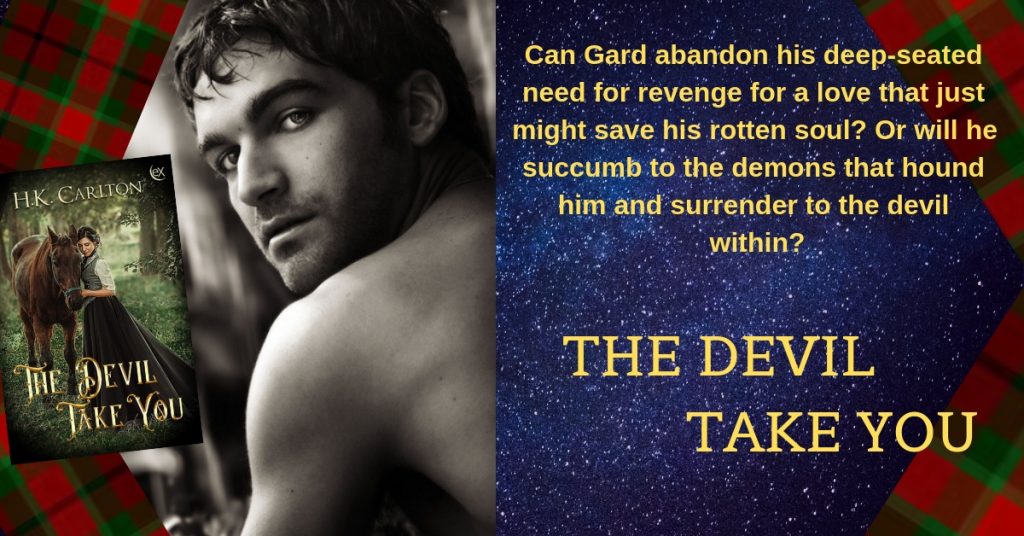 When Brae meets The Devil…

A plume of black smoke rose over the burm, swirling into the sky.

“Dear God, not again.” Brae dropped the bouquet she had been fashioning and ran, perhaps stupidly, toward the village. Even with the wind whistling through her ears, the commotion and terror-filled shrieks of the town folk still reached her.

With her attention focused on locating her family, Brae didn’t hear the horses behind her until the last second.

All of a sudden, her feet lost contact with the damp earth. She choked on a scream as some unknown assailant grabbed her by the hair and plucked her from the ground. The destrier never slowed its pace as she dangled precariously in midair.

In agony, Brae clamped her hands on either side of her head—her scalp threatened to peel away from her skull.

The kidnapper hauled her up in front of him and body slammed her stomach-first onto the horse’s back. Brae’s breath rushed from her lungs at the force. She bunched her hand into the rider’s enormous black cloak and hung on for dear life.

While she struggled to breathe, the brigand wrapped his rather large leather-clad hand around her backside.

“This one be mine!” The sound of his deep voice chilled her. By his accent, he was English! Braelynn closed her eyes and recalled the warnings from Callum and her da. Had her own father’s words cursed her? Was she to learn the lesson the hard way?

She was afraid to open her eyes, but she knew by the smell stinging her nose that they were close to the source of the acrid smoke.

The horses came to an abrupt halt. Brae barely had time to register the fact when someone from behind grabbed her by the ankles and attempted to rip her from her captor’s lap.

“She be mine,” her captor growled.

To her horror her skirt rode high.

“I want her!” the second brigand responded while caressing her bare leg. Brae’s skin crawled.

In terror, she stared up at the raider holding her while the other slid his rough hands ever higher up her plaid.

Leather creaked when her captor leaned in the saddle. He placed one large booted foot in the center of his rival’s chest and shoved. At once, Brae’s lower body dropped as he fell backward from the blow. Her arms pulled taut, stretching painfully, supporting her weight.

Without warning, the man holding her suddenly released his grip. Brae slid down the horse’s side and fell to the ground with a thud in a tangle of voluminous skirts. She did not wait to disentangle herself but seized the opportunity to flee. She leapt to her feet intending to run, but her captor was faster. He grabbed her by the hair yet again. Circling it around his hand, he reeled her in.

“Not so fast, Caileag.” He sneered the last as if it were a nasty word. “You and I have some business to attend.”

Brae fought him, kicking, punching, and scratching, but to no avail. With his enormous reach, he held her at bay until another one of the black-garbed knights gathered her from behind and pushed her into the lean-to attached to the smithy. She landed heavily on one hip on the sub-floor, with the stranger’s hand still wrapped around her hair. He let it uncoil. Long strands hung from his gloves. Her scalp ached.

Petrified, she stared up at the small crowd now gathered. There were four of them, but more outside.

“Come, Marschand. You never take the women. Ya are just tryin’ to prove yourself to Cowan. Give her to me. She’s too bonnie fer the likes a you,” one man jeered.

All the men were dressed the same, entirely in black. But her original captor, the one they referred to as Marschand, was truly pitch-dark from head to toe, including his hair and beard. Even his eyes were two bottomless orbs of bleakness.

Brae gasped. ’Tis him! The devil himself! Absolute terror tried to climb its way up her throat.

I hope you enjoyed the extract!

If you’d like to sample another snippet, head on over to my blog Pick a Genre Already for a sneak peek.

Coming to other vendors soon

H K Carlton is a multi-genre Canadian author of romance, with over thirty titles in publication. From naughty to nice, historical to contemporary, time travel to space travel, and everything in between.

Thanks for such a fabulous blog Kymmie! Good luck with your epic novel!

Something for the Easter Weekend: Making Him Wait