What’s reverse harem? Basically it’s having your cake and eating it, one girl, however many hot guys she can handle, no jealousy. Think of it as a tasty little nibble here and there, a few big delicious bites when the mood arises and a whole lot of flirty, steamy fun. 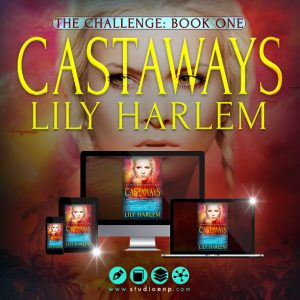 *Please note, the entire series will be available on Kindle Unlimited*

Back Cover Information for CASTAWAYS.

Olivia Bailey is up for The Challenge. Why the heck wouldn’t she be? With mariner qualifications piled high, engineering experience to rival someone twice her age, she’s ready to take on the mighty Pacific Ocean and win. But what about her fellow crew? Five guys, four nationalities. A billionaire’s heir who likes to take charge in every aspect of life, an outback expert with a heart-stopping smile, a Spanish chef with mouthwatering moves and sexy twins who reveal themselves slowly, until it matters, then they act fast. An adventure was what Olivia wanted, it’s certainly what she gets. Because things at sea happen in a heartbeat, friendships grow, tempers heat and desire flares. But what about when it all upends? When the unexpected happens? Will they pull together, or will fear drag the crew of The Temptress apart? 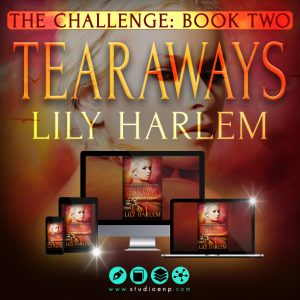 Back Cover Information for TEARAWAYS

Having survived The Challenge, Olivia is now hitting the road with her five sexy men. Seeing them all dressed in tight leathers, with big, growling Harleys between their legs, is enough to have her pulse racing and her mouth watering. So naturally, before long bonds strengthen, love blooms and they’re all enjoying the ride of their lives.

But with little more than bikes and the clothes on their backs, how will they survive a long, arduous journey? Having a billionaire’s heir in their midst is no help when Dante Vidal is insisting on them being cashless and having to work for their supper.

Amongst all of that, Olivia finds herself performing a complex juggling act. Having Alpha males sparring, sparks flying and tempers flaring needs a strong woman to take charge. Is she up for the challenge of keeping her men happy, connected and most of all satisfied? One thing is for sure, it’s a task she’s willing to throw herself into heart, body and soul.

“How is my galley?” Raul asked, pulling on a t-shirt, then settling back in his seat.

“You are too good to me, mi niña hermosa.”

Mason appeared on deck. “I suggest, Captain, that we shift a degree west, it will put us in line with a tiny crop of islands. Uninhabited, but it might be nice to see land on day three.”

“Good plan.” Harry nodded and looked down at the compass. He then turned the helm a fraction. “Can’t believe we’ll be on our third day tomorrow. We’ve made good progress.”

“Yeah, I agree,” Evan said, plucking a pack of cards from the pocket of his shorts. “Who’s up for poker?”

“Si.” Raul rubbed his hands together and grinned.

“I’m game,” Mason said, sitting next to him. “What are we playing for?”

“I think not.” She laughed. “That would leave me at a definite disadvantage.”

“You call having five blokes admiring your body a disadvantage?” Evan chuckled. The sun had given his cheeks a faint pink hue and his lips were shiny, as if he’d slicked on balm.

Damn it, the guy could be an advert for healthy, outdoor living.

“Knowing you lot, you’d club together and fix it so I lost.” She narrowed her eyes at him.

“I wouldn’t.” Lucas shook his head.

It was the first time he’d spoken in front of everyone, but Olivia decided not to make a thing about that. “Okay, not Lucas, but the rest of you would.”

“It’s not that.” She shrugged. “You’re just guys, with lots of testosterone and you like…” She glanced at her chest. “Boobs.”

“Boobs!” Evan burst out laughing. “Yeah, we like boobs.”

“What are boobs?” Raul asked.

“These.” She pointed at her breasts.

“I bet she could teach you some more.” Evan winked at her and dropped the deck of cards into his hand.

Lucas took over the helm and Harry sat at the table, his elbows propped on it and leaning forward. “We play for who gets to take Olivia out on a date in Sydney.”

“Ah, you will.” Evan expertly shuffled the pack.

“To choose who takes you out on a date.” Harry grinned. It was a cocky grin, as though he presumed it would be him she picked.

“What if I don’t want to go out with any of you?” How could she not? She looked around the table. Four guys, very different both physically and in personality, but each gorgeous, intelligent, witty and very eligible. Throw in sweet, sensitive Lucas who was also a lean, strong guy in the prime of his life and just waiting to be discovered, and most girls would be salivating at the thought of being able to take a pick. “No scrap that,” she said. “What if I can’t choose?”

“What because we’re all so hot it’s an impossible decision?” Harry asked.

“Well, I guess I’d have to go by personality, and thinking you’re hot might not be the best trait.”

“Hey.” He held up his hands. “I’m only saying what the gossip mags and my one million Twitter followers tell me.”

“One million Twitter followers?” Mason said. “Jeez, you really got that much to say?”

“No.” Harry shrugged and picked up his deal of cards. “But what can I do? They follow me, I don’t follow them.”

“I bet you get loads of girls desperate for you to notice them,” Olivia said. “All hoping to bag themselves a billionaire.”

“For the record, I’m not a billionaire, my father is.”

“And you’ll inherit it some day,” Mason pointed out.

“Some of it. I’ve got a sister remember. It’ll get halved.”

“But still be in the billions?” Evan said.

“I guess.” Harry looked away, a slight crease between his eyebrows.

For the first time Olivia wondered if he’d like to have grown up in a normal family, with a normal childhood. His must have been one of privilege and indulgence. How had that molded him into the man he was today? Did he regret not blending in with the crowd, or did it suit him to harness attention wherever he went?

She made a sudden decision to never treat him differently from the other crew, okay he was the captain, but other than that, he was just a guy whose father happened to be stinking rich.

And damn it, he was cute with it.

“Everyone know the rules?” Evan asked, turning his hand over.

“Si. Very well.” Raul grinned as he looked at his cards.

Olivia looked at hers. Not great, but it would be a start.

They played for an hour and a half. There was much laughter, quite a few insults and possibly some cheating on Raul’s behalf.

Mason took a turn at the helm so Lucas could join in and he won his hand quickly.

“Last game,” Harry said. “It’s getting late.” He glanced at his watch.

“Ah, but I want to play all night,” Raul said. “I love to play poker. Better with rum but this is what it is.”

Olivia pulled her fleece up around her neck. It was getting chilly, she’d be glad to get to bed.

Her last deal of the pack was a great one, and within a minute she’d won.

“Are you sure you’re not a hustler?” Evan asked.

“That’s for me to know and you to find out.” She grinned.

“You must have a prize,” Raul said.

“Okay.” She paused. “Kind as it is of you all to offer yourselves up for dates in Sydney, what I’d really like is…”

All five men looked at her. Lucas seemed to have held his breath, and Evan tugged on his bottom lip as if a whole bunch of wicked thoughts were going through his mind. Harry raised his eyebrows and Mason leaned closer.

“Did I see some hot chocolate in the galley?” she asked.

All five men seemed to sag a little as they sat back. Lucas returned his attention to the helm.

“I will do it for you. I will get your prize.” Raul stood.

“Thank you.” She passed her cards to Evan who was stacking the pack together again.

Had any of the guys really thought she’d pick one of them as her prize? Was it so obvious she fancied them all?

And I’d never be able to choose between them… 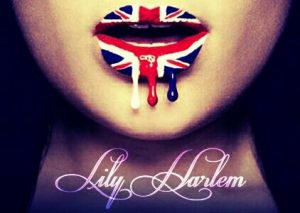 One thing you can be sure of, whatever book you pick up by Ms Harlem, in whichever pairing or genre takes your fancy, is it will be wildly romantic and down-and-dirty sexy so make sure you hang on tight for the ride! Subscribe to her newsletter to get a FREE ebook.