Review by Erotica For All-

Upon his willing slave’s bare backs, Mark has written out his fantasy list in thick red pen. Only Fantasy 12 awaits the tick of completion against their flesh before Mark’s ultimate fantasy – Fantasy 13- can take place.

But have the girls performed well enough to succeed in the final challenge? And why is Mark getting mixed up with Anya’s previous employers at the Bridge’s Gentleman’s Club- a place Anya was all too delighted to escape from?

In order to find out, Mark’s girls are going to have to face some of the fantasies they thought they had left behind them all over again… 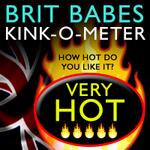 Anya had re-scanned all the emails that had flown across the invisible airwaves of the Atlantic between herself and Candice over the past few weeks. Having retreated to the bathroom to redo her lipstick and add a second layer of concealer to the bags under her eyes, Anya felt was as ready as she’d ever be to face the confident, ultra-efficient American PA over the video link.

Having checked the webcam was working properly, and that she was seated comfortably for the forthcoming exchange of information, Anya grabbed a final glance at the notes she’d made, and turned the conference call facility onto standby.

She was just tapping in the password she required to be patched through to the States when the office door opened and Mark and Clara walked in. Anya’s stomach twisted into a knot of lust as she regarded Clara in a skin-hugging Lycra catsuit, all scarlet and black; a combination which showed her figure off to perfection.

There was no point in protesting that she was about to take an important call; Mark already knew that. Why else would he have bought Clara in, dressed so provocatively, at that exact moment? Her boss was a game player extraordinaire, and he knew precisely how to press her buttons, and freak her out at the same time. Anya had known Fantasy 6 would have to be replayed – but she hadn’t expected it now; so soon after Fantasy 2.

Mark said nothing as he gestured for Anya to rise while he pulled her chair from her desk. Clara, without prompting, crawled under the desk, and crouching uncomfortably, waited for Mark to speak.

Even as her boss pointedly announced the obvious imminent replay of Fantasy 6, Anya was ahead of him, vividly remembering what had happened last time she had been forced to carry out a telephone call with Clara’s head between her legs. This time it seemed she was going to have to endure all the gorgeous delights to come while communing with an audience who could not only hear her voice, but see her as well; and who must never know what was going on below the desk.

‘Roll up your skirt, take off your thong, and sit down. I’m sure I don’t need to tell you the importance of opening your legs as wide as possible.’ Anya kicked off her shoes and obliged. ‘Quickly, girl, it’s time for your meeting to begin.’

As she sat, pulling in her chair as close to the desk as it would go without squashing Clara, Anya tried to steady her nerves. The video line rang, and Anya plastered a convincingly serene smile across her face.

‘How are you, Candice, all well over there?’ Anya felt pleased at how normal her voice sounded despite the knowledge that the woman she loved was curled up only inches from her naked pussy.

‘I’m great, thank you.’ Candice, as no-nonsense as ever, dived straight into the business of the day. ‘I’m pleased to say that the personnel alterations we’ve had this end seem to be an improvement, rather than the procedural nightmare that we both feared.’

Anya listened hard as Candice listed the strengths of the new employees and what she hoped they would bring to Parker Software as a whole. But as the minutes ticked by, and Clara hadn’t so much as breathed on her, Anya found her focus beginning to falter.

‘And if his impact so far is anything to go by, then I judge that Stuart Hopkirk will turn out to be the better of the new candidates to fulfil the transatlantic element of the sales force. He’s more of a “people person”, if you see what I mean?’ Candice emphasised her point by using her fingers to show the inverted commas around the statement that Anya had only partially heard.

Why hadn’t Clara done anything yet? Last time this had happened, her lover had been straight in with the action. That had been hard enough, trying to keep her tone business-like when Clara had been employing her mouth so expertly. This non-action was far worse. Anya was so braced for the feel of the first touch that she knew she was losing the thrust of what Candice was saying.

‘Anya, are you OK?’ Candice’s southern twang sounded genuinely concerned as her counterpart failed to answer a question.

‘Sorry, the screen broke up then for a bit,’ Anya rallied, not daring to glance in Mark’s direction, knowing he’d be annoyed at her lack of professionalism. ‘Could you repeat that one, please?’

‘Sure. I was saying that Hopkins will be over in the UK next month, so I’ll confirm dates with you once flights are booked. Mark should talk with him face to face. His ideas on company development are interesting.’

‘Of course. I’ll sort a meet and greet session in London as soon as you confirm timings.’

‘Excellent! Right, that just leaves us to sort Mark’s visit to the States in the summer. Are you coming with him this year? It would be great to meet you in person.’

‘I doubt it. I – owwww!’ Anya jumped as a sharp pair of teeth dug into her pussy. ‘Oh, do excuse me; I think I was just stung. Must be an insect in here or something.’

Candice’s eyes narrowed. She looked far from convinced, but was too professional and polite to do anything other than take Anya’s word for it.

Anya could feel a blush start to creep up her neck and tinge her cheeks pink as Clara continued to nibble her teeth over and around her mound, pulling back her labia with a sharp pressure which she knew could bring Anya off very quickly.

It was time to end this conference call, and quickly. ‘Well, my diary has the last four days of July pencilled in as a possible. How does that fit with you?’

Candice tapped a few buttons on the out of sight iPad Anya knew she was physically attached to, and looked up with an orthodontically enhanced, white toothed smile. ‘The 29th is out, but the four days prior to that are clear. Shall I book Mark in?’

Without even bothering to check those days were free in Mark’s calendar, Anya said, ‘That would be excellent.’ As Clara’s tongue and right hand joined in the exploration of her crotch, Anya pretended to write down the dates.

‘Anything else you require today, Candice?’ Anya squeezed her fingernails into her hidden palms, trying to deflect the need to wriggle her arse closer to Clara’s lips, which had begun to move even faster.

‘I think that just about concludes things. Thanks for your time, Anya.’

Issuing a smile of genuine relief as Candice bought things to a close, Anya felt Clara’s long fingernails began to delicately scrape the space below her clit. Her smile toward Candice froze for a split second as Clara then forcibly pushed a hand under Anya, shoving her butt upwards so her anus could be tickled.

‘One moment please, ladies.’ Mark strode across the room, and bent into the eyeline of the video link.

‘Good morning, Mark. I’m sorry; I hadn’t realised you were there.’ Candice’s face lit up, leaving no one in any doubt as to how attractive she thought the owner of Parker Software was.

‘I’ve just arrived, sweetheart.’ Mark oozed charm at Anya’s American associate. ‘Could you be an absolute star and give me a brief breakdown of sales figures for the last quarter your end?’

Anya could have cried as Clara’s digits increased their pace. As she struggled to keep her body still from the waist up, her arse squirmed and her shoulders tensed. She felt like some kind of sinister ventriloquist’s dummy as her upper body stiffened, a look which, at an executive level, could so easily be interpreted as lack of confidence, and therefore weakness. If she wasn’t careful Candice would be putting the word about that she was cracking up. Given half the chance, Anya knew she would be on the next plane to the UK, kicking her out, so she could work with Mark instead.

Gathering herself together, doing her best to blank out what was happening to her below desk level, Anya snapped back into PA mode. ‘Actually, that would be very helpful for me as well; but if you wish for some time to gather that information, then I am happy to schedule another call tomorrow?’

‘Well, I can help a little now.’ Candice addressed Mark rather than the PA. Normally Anya would have been offended, but today she was simply relieved to have the impetus taken away from her for a minute, so she could take the opportunity to lift her buttocks from the chair, allowing Clara easier access to her backside. Instantly, Clara shuffled a digit inside her anus, and Anya trapped her girl’s finger and right arm beneath her, successfully limiting the source of the sensually distracting motion around her groin.

Undetected, however, Clara’s left hand continued its adventure by running up Anya’s legs, dancing only the tips of her fingers over the exposed flesh, making Anya shiver, causing the inserted finger to burrow deeper into her backside.

As Candice and Mark discussed import and export figures, Anya found it harder to remain centred on them, her mind drifting more and more to the curled-up creature beneath the desk.

‘Can you confirm that for me please, Anya?’ Mark’s voice snapped Anya back to attention. She was suddenly convinced by the way he and Candice were staring at her that this was at least the second time he’d asked her that question.

She knew there was no point in bluffing; they were both too shrewd for that. ‘I’m sorry, I allowed myself to be distracted. Can you repeat that, please?’

‘Sorry, Anya, I don’t have the time.’ Mark was brusque, and he turned his face back to the video link, treating Candice to his most disarming smile, ‘I must apologise for my PA’s behaviour, Candice. This unsatisfactory situation will be cleared up. Do you have time for another link meeting tomorrow?’

Anya bristled silently, noticing that Candice hadn’t even referred to her diary, and privately hoped she’d find she was already busy and would have to reschedule, and therefore embarrass herself.

‘I’ll speak to you then. Many thanks, Candice; until tomorrow.’ Mark clicked off the link, and the room went deadly quiet…

Available in paperback or as an e-book, The Voyeur can be purchased from-