Eroticon Blog 2: After the Workshop

A few days have now passed since the dust settled on the last event of this year’s Eroticon conference in Bristol. 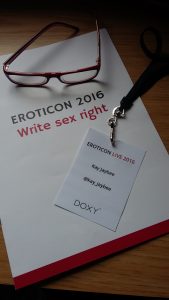 The first part of my blog report on the event can be found here- If you recall, I began to write that last blog prior to teaching me workshop on musical inspiration. The palms were sweating, and the nerves were on high alert.

It may seem strange to you, that even after teaching so many workshops, that I still get nervous. It will seem less odd perhaps if you think about who came along for my lesson…Ashley Lister, Zak Jane Keir, Jaye Peache, Anna Sky…I could go one!1 These people are seriously excellent writers. What then, are they doing sitting listen to me rumble on? Let me tell you- there is nothing like having some of the people you respect most in the writing world waiting for you to impart knowledge to make your palms sweat!

This year my workshop was something of an experiment. I wanted to see if, under the influence of different types of music, I could help steer a writer’s imagination off into a different direction than the one they’d normally be comfortable in. However- I didn’t tell my class that. If I had, then they’d have got hung up on that fact- instead I gave each person a first line of well known song. This had to form the first line of their work. Then, I played three very different pieces of music. 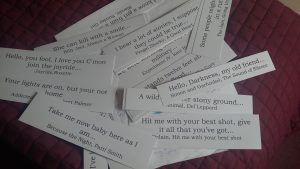 After listening for 3 minutes with their eyes shut to Kate Bush singing, Man with a Child in His Eyes, the challenge was to write a five minute snapshot from the beginning of a story, using the given lyric to start them off.

Then the process was repeated. This time however they listened to What Have You Done Now? by Within Temptation, and had to produce a 5 minute snapshot from the middle of their new piece, before  final few paragraphs were penned after listening to the late great David Bowie singing Let’s Dance.

This workshop produced some incredibly interesting discussion, and more important, some incredible work. Each person found themselves pushed in a different direction- and found they could write in a way they hadn’t known about before. I am very hopeful that some of those fragmented paragraphs will be joined up in the fullness of time, and we’ll see some extraordinary new erotica as a result.

A big thank you to Ruby Kiddell for putting together another great conference – her last one. The challenge is now on to see who will take this event on… (and no, I don’t want to put myself forward to run it- but thanks for asking!)