The Story Behind “Not Taking the Tube”

I am sure one of the most frequently asked questions that passes from the non-writer to the writer is, ‘Where do you get your ideas from?’

My answer is both predictable, and always the same. ‘From all around me.’ I say- ‘from everywhere.’

To give you an example…

I was stood one cool Saturday morning, with hundreds of others, on the platform of Moorgate Tube Station. There was breathing room only, and we were being advised via a barely audible Tannoy announcement, that it was going to take an average of 2 hours to get to Paddington Station by tube (normally a 20 minute run), so we should consider alternative transport. 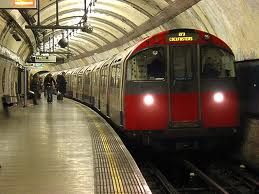 You could feel the tension in the air, the anger was bouncing off the walls, and the language of stress was flying from many a commuter’s mouth. Mobile phones were being launched into life, as apologises were conveyed from those who were going to be very later for work to their employers etc- apart from those who couldn’t get a phone signal- I began to seriously fear for those individual’s blood pressure.

Watching all this from the comfortably resigned position of someone who has three hours before they have to catch their train home, I leant against the grubby grey wall of the station and considered my options. Perhaps, I thought, I should catch a bus.

As I continued to observe my fellow would be travellers, the seed of a plotline began to germinate in my mind. A small and undeniably attractive guard was doing her best, with infinite patience, to explain to the surging mass of commuters what was going on. Facing a barrage of abuse, she calmly carried on, letting all the anger directed at her slip away like water off a ducks back. But what if she snapped? What if her reserve broke…what would she do then?

There and then the story ‘Not Taking The Tube’ was born, a piece which quickly engendered five sister stories, which in turn became my S&M and BSDM based Fem Dom e-anthology Yes Ma’am.

I have never been so glad to be held up by a train!

Here’s a little extract for you…

…Opening his mouth to complain, he found a slim finger pressed over his lips. “Sir, I did not make the tube points fail.” Her voice was perfectly calm. He could smell the dusty claustrophobic atmosphere on her skin as she slowly moved the single digit across his lips making his pulse match his inflated blood pressure. “Nor did I decide to mess up the lighting system. And I certainly didn’t decide that today would be the perfect day to start renovation on the Circle Line.”

His breath rattled in his throat, and yet the presence of her finger somehow prevented him from speaking. It would have been easy to push her away, but the diminutive figure had taken a step forward, and her chest, neat, firm, and encased in a regulation navy shirt and tank top, felt unexpectedly arousing next to his stomach.

“Now, sir, if you go on stressing like this, then you’ll have a heart attack or something. I suggest you allow me to assist you in lowering your tension levels.”

Rational thought was doing its best to communicate with him, telling him that a short dark skinned, incredibly self contained Underground official was unhooking the clasp of his belt. He wanted to rail and shout against the unfairness of delay. He wanted to push her away; shove her; punish her for being so fucking reasonable. He didn’t though; he merely watched as a dangerous smile grew at the corner of her lips.

For a split second time seemed to freeze, as if they were both considering what was about to happen. Then, the woman exploded.

With angry relish she whipped the leather belt from his trousers, dropped it and pulled open his fly so violently that a button came free and skittered across the floor. Gripping his balls through his trousers, she hissed, “You and all you “clever” types don’t even stop to think before you wade in with all your complaints.”

His jaw fell open as she massaged his balls with painful squeezes. It was as if all the weeks and months of unjust dealings had snapped inside her in one go…

You can buy Yes Ma’am

Dabbling Outside My Comfort Zone: Imagine